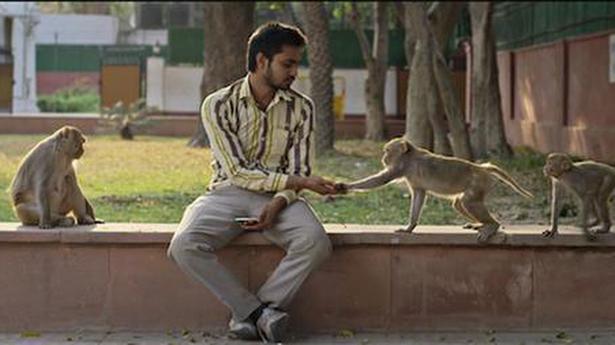 “Kahan narak mein laake phenk diye hain (You have thrown me into hell).” Anjani (Shardul Bharadwaj), the protagonist of Eeb Allay Ooo!, tells Mahender (Mahender Nath), his mentor and friend in the unusual monkey repelling business. The phrase sums up what Prateek Vats manages to do in his second feature—he takes the viewers into the veritable paataal lok, ie netherworld, of the working classes in the sprawling urban jungle of the Indian capital. It’s a world where young migrants looking for a job and a secure future, end up facing inner fears, a deep sense of frustration and indescribable humiliation that builds an insane anger and bitterness within. You can see it reflected on the face of Anjani who lands the prized contractual job of mimicking langurs to drive monkeys away, but somehow can’t put his heart and soul into it. He feels robbed of his own dignity, tries to work around it by using some creative ideas but gets chastised for being inventive. Toeing the line is all he can do.

Vats tells the story through a quintessentially Delhi phenomenon—the monkey menace and an entire business that has been built around driving them away, especially in the corridors of power—in Lutyen’s Delhi, North and South Block, Rajpath, Nirman, Udyog, Vayu and Vigyan Bhawan. Incidentally, the Animal Welfare Board of India had come down on the illegal deployment of captive langurs under the Wildlife Protection Act, which is when this entirely new job opportunity got created for the humans.

The film starts off as a light-hearted satire, playing on the human-simian divide—the odd ways in which they come together, and how they spar and wage a battle. Gradually the film acquires a darker shade of the absurd and its many unresolved crises, and visual metaphors continue to dazzle and disturb us, much after the film gets over. Even as the monkeys assert themselves more and more strongly, the humans get further dehumanised.

The film has an overwhelmingly lived-in feel. It is in the incidental sights and sounds of Delhi. It is in the details of the way the government departments function and in their environment and feel, it’s in the ways that even a walk-on character-like the gynaecologist being consulted by Anjani’s pregnant sister—feels straight out of reality rather than fiction. Or in the fleeting look of pride on the sister’s face when she tells the doctor that Anjani has a “government job”, much coveted in the world of the marginalised. The real comes together in the naturalistic performances so much so, that it gets difficult to separate the professional actors playing the roles from the real people Vats has woven in the narrative. For instance, Mahender who plays himself in the film. It’s in how Saumyananda Sahi’s camera winds through the narrow lanes of the blue-collar workers’ ghettos as well as flies over the wide expanse of the privileged heart of New Delhi. It is also in how Sahi and Vats capture the monkeys themselves, as the kings of their own world, more human than humans can ever afford to be.

Politics, nationalism, religiosity, bigotry, the talk of gods turning pests, class divides—all are explored by Vats in a matter of fact, non-judgmental way, which makes it even more scathing a commentary on human and social condition. What stands out the most is the all-round exploitation of the labour and working class, how humans are holding humans captive. Be it a gulel (slingshot) or a gun, nothing can be empowering, each instrument of power renders them more vulnerable. In the light of the current migrant crises, the film acquires an added note of urgency all its own and reaches out in newer ways in these fractured times.