Counted among one of the iconic filmmakers Mysore Srinivasa Sathyu, popularly known as M. S. Sathyu turned 90 on Monday (July 6, 1930). Far from calling it quits, he is still thinking of making films if he gets financial support. He along with Mrinal Sen, Satyajit Ray and Ritwik Ghatak changed the profile of Indian cinema.

Though he has made eight feature films, three telefilms, and four teleserials, besides directing nine plays in his six decades of creative journey, Sathyu is best known for his post-Partition classic, Garam Hawa, which ushered a kind of new wave art cinema in India. His Garam Hawa, resonates more than ever before in our polarised present.

Recreating real world with a historical and political backdrop is the quintessential strength of Sathyu. He can only be compared only to Mrinal Sen who also dealt with issues, basically political in nature.

National Gallery of Modern Art (NGMA) Bengaluru had organised a week-long festival of films, telefilms and television serials in November 2018. This event provided an opportunity for the present generation film enthusiasts to visit Sathyu’s career. In the course of his retrospective, a documentary on the life and works of Sathyu, which is directed by Masood Akhtar was also screened.

Garam Hawa, the the first directorial venture by Sathyu is based on an unpublished short story of noted Urdu writer Ismat Chugtai, with lyrics of Kaifi Azmi is scripted by Shama Zaidi. The film got India’s top film award-National Film Award for serving the cause of National Integration. When the film was shown in Cannes, Tom Hutchinson wrote in Sunday Telegraph (UK): “Remarkably mature both politically and cinematically, this film is directed with rare delicacy.”

Garam Hawa in a way one of the most controversial films in the history of Indian cinema. The film was promptly branded pro-Muslim without even watching it. A fanatic organisation demanded the immediate arrest of Sathyu. Shiv Sena demanded a pre-release screening to allow the film to show in Bombay. Anticipating communal riots producers postponed the film’s release for a while. Political leaders such as L.K. Advani accused Sathyu of getting Pakistani funds for making the film.

If you look at Sathyu’s own life, it could well be a story for a film. His father wanted him to be either a scientist or an engineer. But Sathyu had no interest in academic education. He wanted to become a filmmaker. After completing his primary and higher education in Mysore and Bengaluru, he quit college while studying for a science degree and left for Bombay to realise his dream of becoming a filmmaker. After being unemployed for some time, he worked as an animator and then joined filmmaker Chetan Anand. “For some time he sold the “Bombay Youth” newspaper in front of Church Gate station. His art direction work for Haqeeqat directed by Chetan Anand fetched him the Filmfare award and he found a place in Bombay cinema. As theatre was his first passion, Sathyu joined Indian People’s Theatre Academy (IPTA), a theatre group with left leanings. But his heart was in films. Through Garam Hawa, Sathyu proved his superb cinematic vision and confidence in handling the narrative form.

His second film Kanneshwara Rama traces retrospectively the tumultuous career of a simple peasant transformed into a Robin Hood like legendary outlaw, challenging the British in the nascent days of non-violence. The film’s strength is the exploration of the folk technique of narrating the story through a ballad at the beginning which serves as an allegorical backdrop (“Naraveera Kanneshwararamanemba Kadu Shoora”). 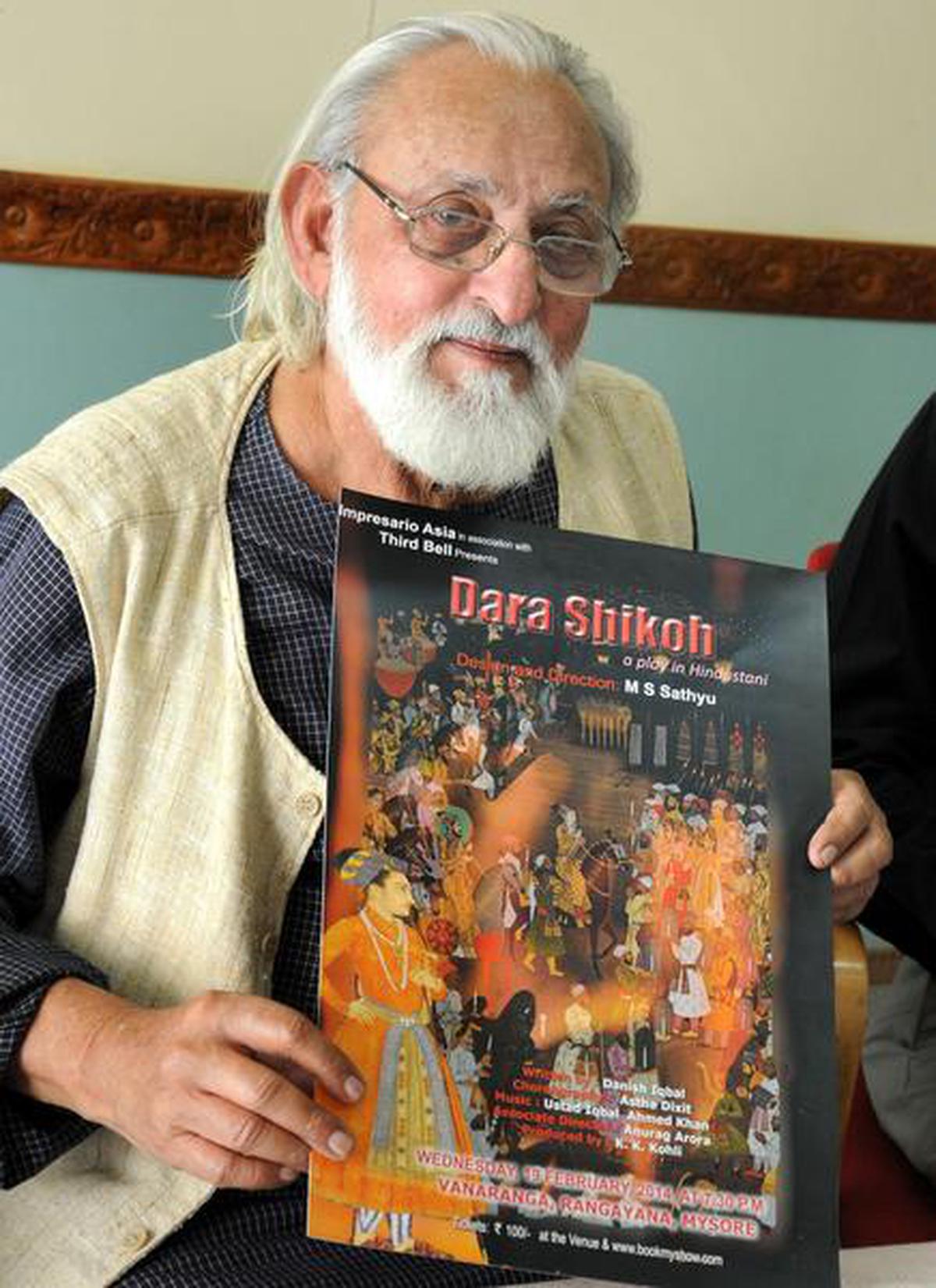 Chitegoo Chinte (The Restless Corpse) is a political comment and a hilarious satire. Bara based on the short story of writer and public intellectual U. R. Ananthamurthy brought Sathyu to limelight again, because of the way he depicted the conflict between bureaucrats and politicians. It was a commercial hit too, running for 14 weeks in one of the theatres in Bengaluru. Chief Minister Gundu Rao attended the inaugural show. After watching the film, he told Sathyu that had he been contacted before making the film, Sathyu would have got some interesting inside information. Such was the impact of the film. In fact, Shashi Kapoor helped Sathyu in making the film by contributing Rs. 25,000.

Sathyu shot his Kahan Kahan Se Guzar Gaya in Kolkota. The film starring Anil Kapoor, Sharon Prabhakar, Nitin Sethi, Neesha Singh, Reeta Rani Kaul. He got the help of West Bengal government for the film. This film is about the state of helplessness in youth, about their drifting away from responsibilities. Ghalige is Sathyu’s return to his favourite theme of secularism. He addressed the Khalistan issue, through the prism of caste and religion. Ghalige dealt with the politics of secularism at a critical historical junction.

He dealt with the still relevant issue of Devadasis (exploitation of women in the name of tradition). The film explores the conflict between tradition and modernity. The film was premiered at Ahmedabad International Film Festival and screened at Minsk International Film Festival at Belarus. Sathyu also made Kotta, a film based on the novel by former chief minister, M. Veerappa Moily.

Despite engaging in films, Sathyu has not neglected his passion for theatre. He started his career as a stage art director and turned out to be one of the forerunners of Indian Peoples Theatre Academy (IPTA). His first love has always been theatre. Ever since Sathyu has been making films at regular intervals, but has never left his contact with the stage. Till date, he has directed nine plays including Dara Shikoh, Mudrarakshasa, Aakhri Shama, Rashoman, Bakri (Kuri in Kannada), Girija Ke Sapne, Mote Ram Ka Satyagrah, Emil’s Enemies (a play around the last assassination attempt on Adolf Hitler-Emil was the code name given by the German underground for Hitler), Safed Kundali, Amritha, and Gulebakavali. His play Dara Shikoh is considered as a modern classic and turning point of traditional theatrical sensibilities. Another of his landmark play is Amrita based on the work of Danish Iqbal. This play brings into focus the perpetual mystic love of Amritha Preetam, the renowned Punjabi writer. His stage design set a new standard for theatre and cinema. He uses his distinctive stagecraft in the films too to make political statements. Taking Sathyu’s contribution to the field of theatre, Sangeet Natak Akademi honoured him with an award and fellowship.

To understand Sathyu’s love for artistic images, one has to watch Ghalib, a sensitively made documentary on the Urdu poet. The film reflects Ghalib’s frustration and repeated attempts to escape from poverty into the freedom of unfettered wandering. The images are drawn from contemporary miniatures, monuments, and drawings. He penetrated into the small screen and made serials such as Pratidhwani, a serial based on stories of Kannada writer Masti Venkatesha Iyengar, Choli-Daaman, Kayar, and Antim Raja of Kodagu.

Most of the films made by Sathyu are political in nature, as he himself admits. “I am branded as a political filmmaker and political theatre person.” In a way, Sathyu reveals an acute eye for the specific realities of the Indian experience, simple and direct.

Even in his nineties, Sathyu still remained an enigmatic figure. With his flowing beard, intense, meditating eyes, he triggers the curiosity of those who talk to him on the issues on public causes. Underlining the importance of performing arts, Sathyu observes that the performing arts have a responsibility to allow debate discussion on socio-economic and political issues. Otherwise, we will become totally immune to the issue the country is facing,” he adds.

Previous articleHow to Install iOS 14, iPadOS 14 Public Beta
Next article‘We were all fish out of water’: growing up in Melbourne’s high-rise flats