Entomology workers under the shadow of disease 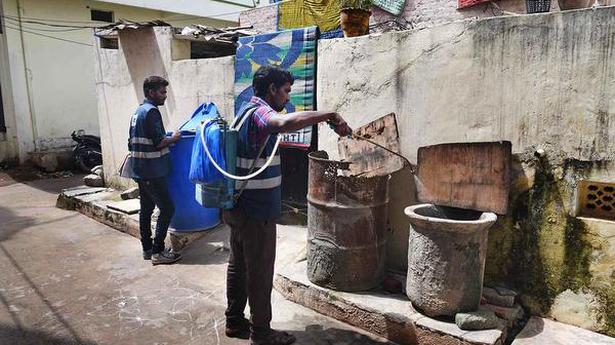 Disease prevention is an onerous task fulfilled by the GHMC Entomology field workers under testing circumstances, putting their own safety in peril. They are on the forefront, be it control of vector-borne diseases or COVID-19 spread.

However, allegations are that they are not being provided enough safety gear by the corporation, even while being expected to disinfect areas where COVID-19 positive cases have been detected. Contrary to the state of affairs in Entomology wing, the disaster response teams from the Enforcement, Vigilance and Disaster Management wing, who were initially seen spraying the disinfectant solution in public places, were given full PPE gear, complete with hazmat suits. Later, for reasons best known to the GHMC authorities, the entire spraying operations have been handed over to Entomology wing.

Though the corporation initially gave safety kits to the workers comprising masks, gloves and hand sanitisers, now, the latter complain that the same are not being replenished any more.

“We have got only one mask, a single pair of gloves and one bottle of hand sanitiser. How do they expect them to last three to four months, worn eight hours a day? We are forced to buy our own masks to protect ourselves,” says Chinna Mallesh, a worker in Jahanuma division.

He says the workers are being sent to risky locations where they could contact the deadly infection, such as quarantine centres, hospitals and graveyards, besides the areas where COVID-19 cases have come to fore.

“Already, 30 to 40 workers from various circles have been infected. Though we are forced to risk our lives on daily basis, no safety gear is being provided. When we ask our immediate supervisors, they blame the head-office for the apathy,” one more worker revealed under the condition of anonymity.

Entomology wing is getting several localities in the city sprayed with the disinfectant on a large scale, even while being unsure about its efficacy in preventing COVID-19 infection. The disinfectant being deployed is sodium hypochlorite solution, which is but ordinary bleach. Every day, over 700 litres of the solution is being sprayed across various localities of the city.

“There is no proven study to vouch for the efficacy of the solution in COVID-19 prevention. But we keep getting calls from across the city, seeking disinfection of their respective localities. Even public representatives such as corporators and legislators call every now and then, and we are forced to oblige,” says a senior official.

Several positive cases have surfaced in Pragathi Bhavan too recently, though the premises is disinfected regularly twice a day.

Entomology workers are also getting psychologically affected, owing to the work pressure and the burden of having to visit infected zones on daily basis, the official informed. However, no counselling services are being provided for them.

Officials said a set of safety gear had been provided to the workers, and a request has been placed for another round of distribution, and the Engineering wing is processing the tenders.