Latest high-resolution images show that China has for the time being honoured the disengagement agreement and pulled back at least one km from the point of confrontation of June 15.

This is the second de-escalation by the two sides in the river valley in recent times. (Image: Maxar Technologies/ India Today)

The Chinese pullback in the Galwan river valley has been confirmed by the latest satellite images reviewed by India Today. High-resolution images captured on July 6, shows that the People’s Liberation Army (PLA) has pulled back at least one km from the point of confrontation of June 15. The images show that the tents, vehicles and pre-fabricated roofs put up by the PLA near patrol point 14 (PP14) have been removed by the Chinese troops.

The images captured by Worldview 3 satellite of space firm Maxar Technologies and shared with India Today, also suggest that the Chinese troops have rebuilt roads which lead to PP14 over past few days. These roads were badly affected due to overflowing water in the Galwan River.

In the new imagery, newly built roads are seen empty and no new construction work or human activity was seen in the forward area. The first Chinese tent is visible almost one km away from the point of conflict in Chinese territory. After the incident of June 15, the Chinese army had dramatically increased its presence near this point with dozens of camouflaged tents and vehicles. Speaking to India Today Col (Retd) Ajai Shukla said “it’s a good step forward, but there has been no word on the forward movement in the negotiations in Pangong and Depsang. We want pullback from all sectors, we don’t want the Chinese troops to pull back from one sector and retain other two, we need to be wary of these Chinese tactics”. 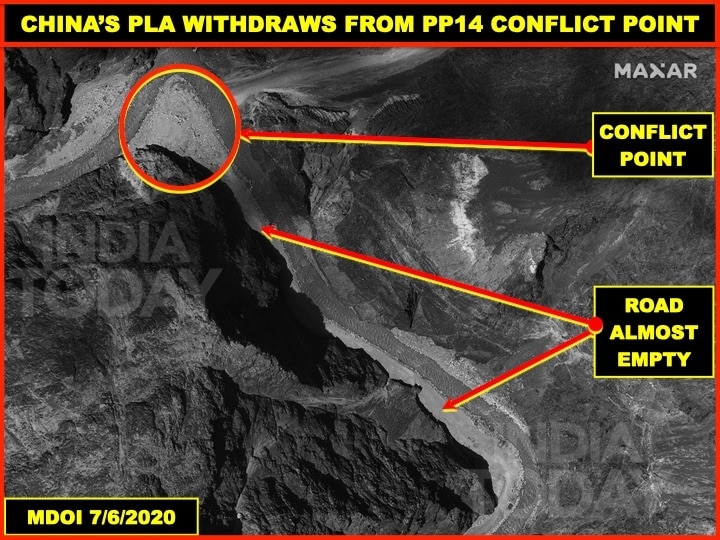 This is the second de-escalation by the two sides in the river valley in recent times. The first de-escalation happened after the military talks on June 6 but didn’t stop the June 15 hand to hand combat in which both sides suffered causalities.