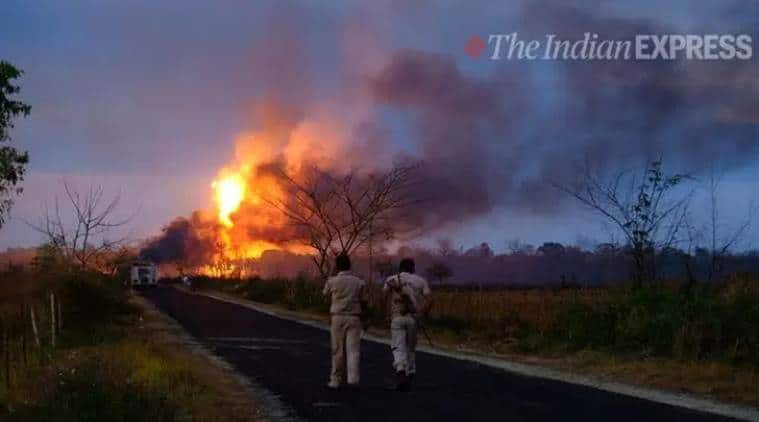 
The committee shall visit and inspect the site and the area in question and examine extent of loss and damage caused to human life and wildlife. (Express Photo by Diganta Rajkhowa)

The National Green Tribunal has imposed an interim penalty of Rs 25 crore on PSU major Oil India over its failure to stop fire in Assam’s Baghjan oil well resulting in damage to the environment. Well number 5 at Baghjan in Tinsukia district, has been spewing gas uncontrollably for the last 27 days and it caught fire on June 9, killing two of OIL’s firefighters at the site.

A bench comprising Justice S P Wangdi and expert member Siddhanta Das constituted a committee headed by former high court judge B P Katakey to look into the matter and submit a report in 30 days.

“In view of the prima facie case made out against Oil India Ltd on the extent of damage caused to the environment and biodiversity, damage to both human and wildlife, public health and, having regard to the financial worth of the Company and the extent of damage, we direct the OIL to deposit an initial amount of 25 crore with Tinsukia District Magistrate,” the bench said in its order passed on Wednesday.

The committee also comprises Member Secretary of Central Pollution Control Board, senior expert from Council of Scientific and Industrial Research, Dr. Sarbeswar Kalita of Guwahati University, former forest Biodiversity Board member Abhay Kumar Johari, Ajit Hazarika, ex-chairman Oil and Natural Gas Corporation Limited among others. “We are of the view that in order to proceed further in the matter effectively, it would be expedient, in the meantime, to constitute a Committee of Experts to look into the matter.

“The state pollution control board and Tinsukia District Magistrate shall provide all logistic support including personal protection equipment (PPE) in relation to the Covid-19 pandemic and security to the members of the Committee,” the bench said while issuing notices to Centre, Assam govt, IOL and others.

The committee shall visit and inspect the site and the area in question and examine extent of loss and damage caused to human life and wildlife. The matter is posted for next hearing on July 29.

The order came on a plea filed by activist Bonani Kakkar and others alleging failure of the authorities in preventing the blowout of Baghjan oil well. The petition contended that oil has spilled into the Dibru river causing a film of oil in the river that passes through the Maguri-Motapung wetlands, an important bird and biodiversity area, and along the Dibru Saikhowa National Park.

The plea said that the blow-out (uncontrolled release of crude oil or natural gas) has left behind huge volumes of residue as gas condensate which is a mixture of chemical compounds that are toxic for land and vegetation.

The blowout is not only hazardous to the health of the people but has also affected their livelihood, the plea said.

The Baghjan oil field has a total of 22 producing wells — 18 crude and four gas. The oil field has been in operation since 2003. Following the accident, the PCBA (Pollution Control Board of Assam) sent a show-cause notice to the energy major on June 10 seeking details of its operations in Baghjan in the last 15 years, within one week.