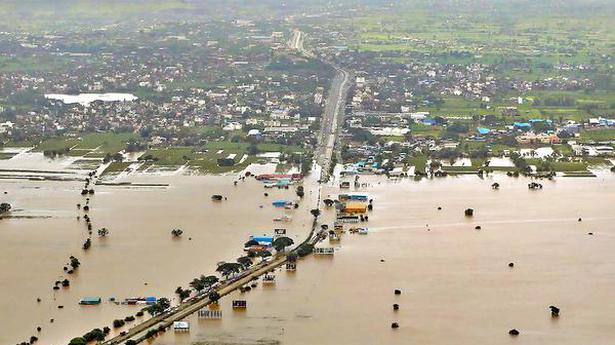 Karnataka and Maharashtra have agreed to set up a multi-level coordination committee to monitor the flow of river water between the two States and avoid floods in the Krishna basin.

This was among the decisions taken at a meeting between Karnataka Major and Medium Irrigation Minister Ramesh Jarkiholi and Maharashtra Water Resources Minister Jayant Patil, along with a team of Irrigation Department officials, in Mumbai on Wednesday.

The panel will have sub-committees that function at three levels [local, district, and State] and will also include Irrigation Engineers and local Revenue officials in charge of rescue and rehabilitation.

The local committee will include officers who are in charge of the sub-division [officers of the rank of Assistant Commissioner and Assistant Engineer].

Deputy Commissioners, Chief Engineers and Superintending Engineers will be in the district committee, and officers of the rank of Secretary and the heads of Irrigation Corporations will be part of the State-level committee.

“We are utilising the gangplank approach to establish immediate and seamless communication between officers by connecting officers at different levels directly,” a Karnataka Irrigation Department officer, who was present in the meeting, said.

“With this system in place, officers need not seek permission from their seniors before talking to the officers across the border, but only need to keep them informed. This will eliminate delays and improve the response time of both States,” he said.

The modalities will be worked out at a separate meeting of officers in Mumbai and Bengaluru. “Apart from hotline telephone connections, officials will stay in constant touch with each other using email and closed social media groups. They will not insist on written orders for the opening and the closing of dams during emergencies,” said another officer.

“Real-time communication between local- and district-level officers will ensure exact information on crucial data, like quantum of water release, time of release and acceleration of water depending on the amount of rainfall and inputs from run-off streams. This helps the officers operating the next reservoir to open them or close them. They will be able to calculate the time and quantity of inflow and prepare for outflow through the left and right bank canals and the river,” said the officer.

In 2019, both States suffered crippling floods following heavy rain in south Maharashtra and northern Karnataka. Over 600 tmcft of water was released from Maharashtra into Karnataka. This was nearly four times the amount of water that can fill the Almatti dam [123 tmcft]. Coupled with this, the six riparian districts of the Krishna received 25,000 mm of rainfall in three months. This was slightly more than 50 times the aggregated annual average rainfall of Bagalkot district. Both States blamed each other for “improper dam management” for the floods.

Mr. Jarkiholi hoped this would lead to better understanding and improved communication between the two States and have better processes for flood management.