Home States Meghalaya For fruit winemakers of Meghalaya, the pandemic has brewed some good news
StatesMeghalaya

For fruit winemakers of Meghalaya, the pandemic has brewed some good news 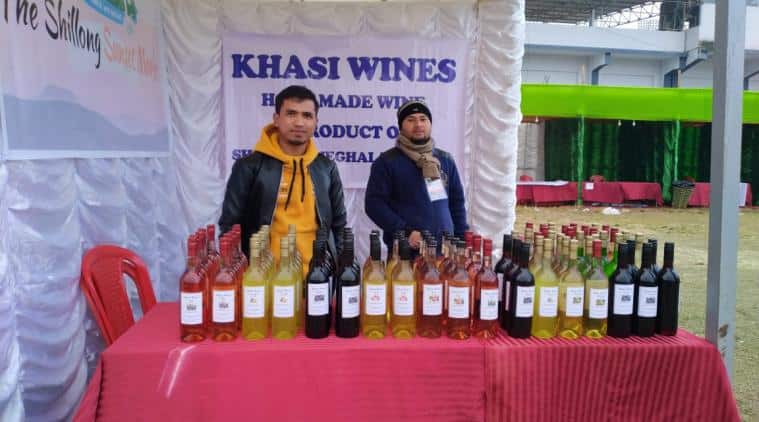 
The Meghalaya government has announced plans to issue licenses to home-made fruit winemakers.

Brian K Daly, a 73-year-old retired banker in Meghalaya, has been making fruit wine since 1992. “Pears, strawberries, bananas, peaches, plums — wine can be made from every conceivable fruit in the hills of Meghalaya,” said Daly, who specialises in three kinds: pineapple, as well as two indigenous fruits that grow wild in Meghalaya: sohiong (black cherry) and soh mon (Meyna laxiflora).

While the septuagenarian has been bottling his wine under the homegrown brand ‘Daly’s’, the absence of a commercial license meant that he has never been able to sell in shops. 40-year-old Dr Arnest Marbaniang, too, has run a small fruit winemaking unit at home in Shillong for about a decade now. “During the lockdown, I realised how popular fruit wines were. Buyers would request for home delivery but due to restrictions it could not be done,” said Marbaniang.

For years, people like Daly, Marbaniang and several other fruit winemakers in the state, have been hoping for a commercial license to sell their products. “Governments would come and go, but nothing happened,” said Daly, who is also a well-known cave explorer in the state.

Leading this fight for the license is activist Michael Syiem, who has been pitching hard for commercialisation of the practice since 2003.

Convinced of its untapped potential, Syiem launched the ‘Shillong Wine Festival’ in 2002 — an annual platform every November for winemakers to sell their products. While the festival sustained and grew over the years, the efforts for the commercialisation of fruit wine remained largely unsuccessful.

On Tuesday, however, the Meghalaya government announced plans to issue licenses for the manufacture and sale of homemade fruit wines to push them in domestic and international markets. The draft rules have been uploaded to the Meghalaya State Portal website, and suggestions welcome.

It took 17 years — and a pandemic — to bring Meghalaya’s fruit winemakers a step closer to legalising their trade.

Like many states looking for ways and means to revive their battered economy in light of COVID-19, Meghalaya, too, was quick to form an economic task force, headed by Chief Minister Conrad Sangma.

While the state levied a 25 per cent tax on liquor to generate extra revenue, the call to commercialise fruit wine comes at a time when there is a marked emphasis to promote a self-reliant economy, and be — as the Prime Minister Narendra Modi has termed it — “vocal for local”.

“It [fruit winemaking] is self-sustaining and will prevent the exodus of poor people from villages to urban agglomeration or outside the state,” said Pravin Bakshi, Commissioner of Excise, Meghalaya, about the move. Fruit winemakers in the state have been long hoping for a commercial license to sell their products.

According to Syiem, the cottage industry, if correctly tapped, can be a source of employment to many and a true realisation of the horticultural potential of the state.

Some of these fruits, which grow in abundance, are not necessarily eaten. The black cherry grows well, but is not as popular as a pear or an orange. “So people end up cutting the trees where they grow, or sometimes, fruits like the soh mon just fall on the ground and rot,” he said, “Now they make excellent wine — so if we commercialise it, then it will not only help those who make the wine, but the farmers and owners of the trees.”

Fruit wine can take up to a year to make. “The fruits are boiled (sometimes), crushed and mixed with yeast and other ingredients,” said Daly, adding it took him years of research and experimentation. He sells his wine at about Rs 500 per bottle.

Marbaniang, who is a doctor by profession, has trained a few family members and friends in the art of winemaking. These wines are now sold under the brands, ‘Khasi Wines’ and ‘Nes-Ki Wines’, to friends and acquaintances. He said fruit wine, promotes healthier drinking habits as they have lower alcohol content compared to hard drinks. “About 8-15 per cent alcohol content, depending on type of fruit and yeast strain,” he said. According to the government’s draft rules, homemade wines should “not exceed 14 per cent ABV (alcohol by volume).”

According to Daly, a license will go a long way in standardising the product. “Not any Tom, Dick or Harry can make and sell it,” he said, “There will be quality control and regulation.”

Marbaniang added that he wanted a strict wine policy, with a safety protocol in place. “In the wine festivals, there is great response from local population. Buyers from outside the state have also expressed interest but due to licensing issues no deals could be inked,” he said.

When the policy is finalised, Syiem feels that the government should stick to keeping fruit winemaking a small-scale industry. ”They should not bring in big industry players. The point is to help the local winemakers,” he said.

Previous articleKumudini Lakhia: The lovable diva of choreography
Next articleTripura gets its first international waterway with River Gomti approved as Indo-Bangla protocol route