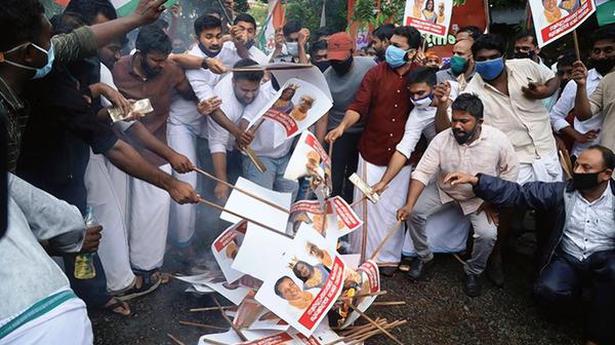 The National Investigation Agency (NIA) said on Saturday it had detained two suspects in the Kerala gold smuggling case from Bengaluru.

“Accused Swapna Suresh and Sandeep Nair have been detained. They are being examined and will be arrested in due course. They were detained from BTM Layout in Bengaluru,” an NIA spokesperson said on Saturday.

The agency had registered a case a day ago.

The NIA had earlier said in a statement that initial inquiries suggested that the “proceeds of the smuggled gold could be used for financing of terrorism in India.”

The 30 kg gold concealed in imported plumbing material was seized by the Customs officials on July 5 upon inspection of an air cargo consignment addressed to the Consular General of the United Arab Emirates.

The Customs and the NIA wanted them for separate offences in a case relating to the seizure of 30 kg of gold from Dubai hidden in a shipment addressed to an official attached to the consulate of the United Arab Emirates here.

The Customs valued the contraband at ₹15 crore.

The NIA, possibly put a phone trace on the suspects and used the help of local police to track the suspects. By some accounts, the NIA zeroed in on the accused when Ms. Suresh’s daughter, a college student, switched on her mobile phone to call her friend in the capital.

Investigators had earlier tapped this person for information on the whereabouts of Ms. Suresh.

The NIA had been hard on the heels of Ms. Suresh ever since they booked her on the charge of anti-national activities on Tuesday. The NIA was probe focussed on whether the anti-national forces had used the proceeds from the complex gold smuggling operation to fund terrorist activities in the country. The Customs probed the economic angle of the offence.

Ms. Suresh, a former employee of the UAE consulate, had worked on a “request basis” for the mission. She came under a cloud of suspicion after she allegedly pressurised a Customs officials to release a shipment addressed to the consulate expeditiously.

Ms Suresh had aroused interest when she attempted to return the shipment to its port of origin after she reportedly felt something fishing in the reluctance on the part of the Customs to clear the suspect cargo.

Ms Suresh’s indictment for smuggling and the optics of her proximity with persons in power had emerged as tools for the Congress and the BJP to berate the Pinarayi Vijayan government. The NIA has reportedly moved a magistrate court in Bangalore for a transit warrant to bring the suspects to Kerala.