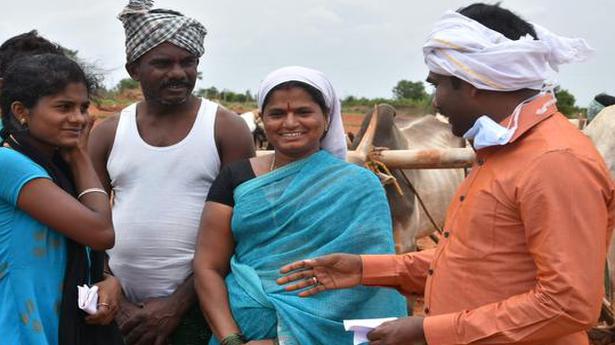 A farmer couple, K. Nagabhushanam and Durga Bhavani, are at their wits’ end as they lost more than ₹1 lakh investment and three months of hard labour on a three-acre farm land, where fully grown okra crop is left unattended, in Marthadu village in Garladinne mandal of Anantapur district.

They said that the district administration did not come to their rescue in time to market the best quality of okra during the three months of the lockdown, when there were no buyers.

Several villages in Garladinne mandal of Singanamala Assembly constituency on Sunday showed a sorry state of affairs as there was no government support or marketing efforts for vegetables and horticulture crops like okra, cluster beans, ridge gourd, kidney beans and broad beans and sweet lime. Most of these were left to rot in large fields.

“We tried to sell okra, but were offered just ₹2 per kg. It was not sufficient for even paying the labour charges for 12 women for plucking on a single day, which costs ₹3,000,” Durga Bhavani said.

“Okra needs to be plucked every alternate day to get tender ones. As long as the Hyderabad and Bengaluru markets were open, the price was good enough, but during the lockdown, there was no return even for the crop on a land that has water facility,” she rued.

The family owns another five acres of dryland with no water facility where they have started sowing groundnut from Guru Purnima Day on Sunday with the hope that the monsoon rains would come handy to get at least 15 to 20 bags (50 kg each) of groundnut yield per acre in 120 days.

With good rains in June, the farmer’s family expect to recover the losses with this crop and raise enough for studies of their two children, who are in the high school.