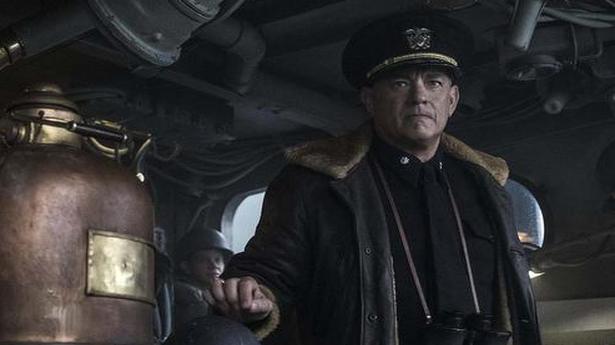 Perhaps the best thing that can be said about Greyhound, is that it doesn’t feel at all like a fictional tale —it’s based on the 1955 novel The Good Shepherd, by C.S Forester — and that’s tribute to the fantastic amount of detailing that’s gone into developing not just the plot, but also the lived-in feel that resonates throughout the film.

Following his Oscar-nominated turn in A Beautiful Day in the Neighborhood, Tom Hanks returns after battling the coronavirus — and beating it (was there any doubt?) — this time, as another mentor figure in uniform. The genre clearly appeals to him. Strains of his performances in films like Captain Phillips, Sully and course, the most memorable of them all, Saving Private Ryan, echo throughout his latest incarnation as a war commander caught in a vicious battle at sea.

Directed by Aaron Schneider, the plot is quite straightforward: In February 1942, the USS Keeling (Call sign ‘Greyhound’) leads a convoy of 37 ships with Allied troops and supplies, from US to Britain, just months after Pearl Harbour. Commander Ernest Krause has to navigate them across a dangerous part of the North Atlantic, named the ‘Black Pit’, which is out of aircraft range, as a wolfpack of German U-boats chase them down in the stormy seas over the course of 48 sleepless hours.

On the surface of it, Greyhound could play out as a quintessential WWII drama that’s essentially a cat-and-mouse game between two sides, and the one we are rooting for is led by an astute leader who inspires his men to fight against the odds.

And that’s exactly what the film is — as traditionally old-fashioned as it gets — but with one striking difference: Tom Hanks’ character.

Krause isn’t your proverbial hero; he’s on the first day at his new job and is plagued by self-doubt, insecurity and second guessing every decision of his, even as his trustworthy crew ready themselves to follow him till the end. And this is where Hanks elevates the film to being so much more than it’s storyline, with a layered, almost internalised performance that’s less on dialogue and actions, but more starkly etched in the crippling anxiety on his face.

Hanks plays the humble and openly religious Kraus with infectious earnestness, as the perils of sea combat quickly dawn over him, surrounded by utter chaos that descends aboard the Keeling in the face of attack, complete with screeching German taunts over the radio that accentuate the palpable tension.

Kraus has to become the leader his men want him to be — and quickly — and his arc is poignantly captured by Hanks, though the characterisation of the rest of the supporting cast: Elisabeth Shue as Kraus’ lady love whom we glimpse in a fond farewell before the Keeling sets sail, and Rob Morgan and Stepehen Graham as subordinates on the ship, leaves more to be desired.

Still, at a slick 91 minutes, the film doesn’t really have the space for the other characters to really come into their own — and though the stunning ocean and action sequences (by cinematographer Shelly Johnson) clearly deserve the magic of a big screen as opposed to a streaming platform — Greyhound largely works, more often than not, as a drama, character study and thriller all wrapped in one.

Hanks does agree with the notion that the film is crying out for a theatrical release — he’s not just the lead star in Greyhound, but also a producer and wrote the screenplay —as evident in his recent interview to The Guardian, in which he said that the film being out on Apple TV+ is, “an absolute heartbreak. I don’t mean to make my Apple overlords angry, but there is a difference in picture and sound quality.”

But after paying $70 million for exclusive streaming rights, Apple have finally got their first big-ticket headlined-by-a-bonafide-A-lister potential-blockbuster-on-the-cards on the platform, and it is one they will be counting on for a long time.