‘Gulabo Sitabo’ movie review: A biting satire on Lucknow and its people 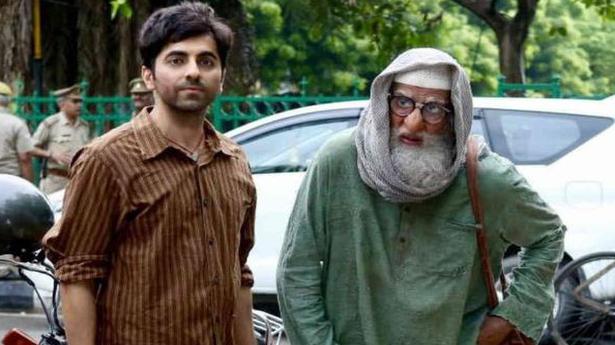 Somewhere in the middle of Gulabo Sitabo there is a rather nimble give and take between Baankey Rastogi (Ayushmann Khurrana), one of the tenants of an old, crumbling Lucknow haveli, Fatima Mahal, and Pandeyji (Shri Prakash Bajpai) an old friend of the landlord Mirza Nawab (Amitabh Bachchan). “Aaj bade din baad tapke (You dropped by after a long time),” observes a catty Baankey. Pandeyji shoots back, at once piercing and dismissive: “Pake the to tapak gaye (I had ripened so dropped).” It’s difficult to translate the humour redolant in Pandeyji’s fruity analogy that cuts through Baankey like a knife and leaves him groping for words, but three days after having watched the film I still can’t stop chuckling away at the wordplay.

The beauty of Gulabo Sitabo rests solidly on its wonderful, wondrous use of language — the Hindi-Urdu-Awadhi in which Lucknow talks; and fights. Every single situation, every scene, each and every moment in the film is about people bickering incessantly and getting back at each other. Everyone is techy, everyone cutting the other down to size. It’s an all out war, in which words are the weapon and such beautiful ones at that. People might be ignoble and their instincts base, their disputes might be petty and the greed that drives them lowly but their language is dignified even when it demolishes. It’s a refined world despite the darkness and decay at its heart. A culture pirouetting on deadly wit that is slowly disappearing along with it and Juhi Chaturvedi tries to capture it in all its sordidness and glory in her writing. The lyrics are perfectly in tune with the film’s lingo. Like “Fati achkan ke dhaagon se latke budhau” — an evocative description of an old man hanging on to the threads of his torn coat.

The panoramic shots, the bird’s eye view of Lucknow as well as grungy close ups of the haveli, its sprawling courtyard and the many rooms along the alleyways, all reiterate an incredible beauty in decline. Shoojit Sircar crafts a rare film that is as much a melancholic lament as it is a biting satire on the place and its people.

Against all of this, in the backdrop, plays out another fading Lakhnavi tradition, that of glove puppetry — called Gulabo Sitabo, from which the film derives its name — spun on two warring women, the wife and mistress of a man. Chaturvedi reinvents it as a tale of a landlord and tenant — Mirza and Baankey — sparring over Fatima Mahal even as Mirza waits for his Begum Fatto (Farrukh Jafar, delightfully sharp-tongued as she was in Peepli Live!), 17 years his senior, to die for him to stake a formal claim at the property. Meanwhile, the archaeological department, a local politician and a builder also have their eyes on it. But, hang on, the relationship triangle integral to the puppet tale of Gulabo Sitabo finds another gender-inverted parallel here, telling any more of which, would be unsuitable for the enjoyment of the film, specially as it comes riding on the terrific twist in the tale.

The film throws you off in more ways than one, most winningly so with its subtle gender play. It’s the women who turn the tables on men. Though it might have two top league male stars staring back at us from the posters, and both of them are in great form, they bravely play characters who come out as out and out losers. The women might not be foregrounded in the film but its universe belongs entirely to them, three generations of women in fact.

There’s a mother who insists on her daughters’ education and makes her son work for that end when her husband dies. There are the sisters who joke about their unlettered brother who runs an aata chakki (flour mill). There is a serial eloper, another who will blithely try to extract an LIG-MIG flat out of a man and yet another who will put a man in his place simply by enquiring about something as banal as organic aata (flour). These women are free birds without quite sporting the usual filmi signals of being liberated — no cigarette and sharaab (liquor). They will have their guilt-free, steamy trysts with men on the sly, be it behind the water tank on the terrace or in a shop in the market place. One will hit at a man’s self respect — “atmasamman ko thes” — by making him realise that he was the third in a row that she had been taking on a spin. Another will run down her man by calling him “akal se gareeb (lacking in intellect)”. Together they subvert the conservative institutions from within and emasculate the male ego, deliciously so. Yet, thankfully, are not judged for that. They have a playfulness, sense of humour and a zest for life. “She is too good,” says lawyer Christopher (Brijendra Kala) about Baankey’s sister Guddo. So is Srishti Shrivastava who plays the role with such elan and chutzpah that she literally walks away with the entire film.

Gulabo Sitabo surprises with how it gives heft to even the minutest of characters. No caricatures here. No, not even my favourite Pandeyji whose only job seems to be to provoke his bestie Mirza and pray for his Begum’s death — “Eee jaada unko le jaayega (This winter will take her away)”. Every single character is idiosyncratic, be it Gyanesh Shukla (always reliable Vijay Raaz) from the archeology department or the lawyer Christopher (Brijendra Kala, finally in a role that gives him enough to dig into) or the casting director Jogi Malang himself in the tiny role of the builder Mun Mun. The quaint bunch makes Gulabo Sitabo an unusual mix of rootedness and a whimsy, which feels more Western than typically Hindi mainstream cinema. The mix would charm and endear itself to a set of viewers much as it could also leave a lot utterly perplexed and bewildered. The middle gets a little too overblown but Gulabo Sitabo manages to string all the loose ends well together in the end.

It is a film that is rich in details. For instance, the running thread of the Begum’s memory of Nehru’s visit to Lucknow, the way she keeps harping on him, quite like India’s current governing party’s obsession with him. But not for the same reasons of course. I watched the film twice over and feel that there’s lots between the words, and the sights and sounds of Lucknow that I might have still missed out on. What is unmissable is the overarching romance. Not between two human beings. Gulabo Sitabo is all about love and longing not quite found between individuals, all because “haveli ke saath aashiqui (romancing the mansion)” comes in the way. But is that true love? The film’s soundtrack says it all. “Kya leke aayo jag mein” and “Aana hai jaana hai, jeevan chalte jaana hai” are the reminders of the futility of covetousness in the face of the transience of life. Eventually, it is all about letting go and moving on.