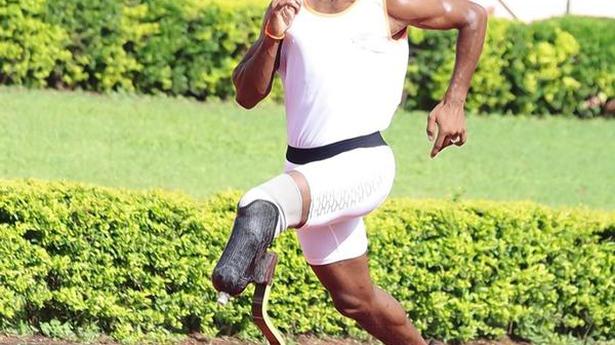 Sheer grit has always been the driving force for para-athlete Anandan Gunasekaran’s achievements. The blade runner has set his sights on fulfilling his dream of winning a medal in the Paralympics.

That the 400m event he specialises in does not feature in his category (T64) at the Tokyo Paralympics hasn’t bogged Anandan down. The 33-year-old, who trains under Mohammed Kunhi, has found a way to overcome this disappointment by preparing hard for the 200m, an event in which he bagged bronze in the Asian Para Games 2018. He had also won a silver in 400m.

Anandan, who hails from Kumbakonam, joined the Army in 2005. He lost his left leg in a landmine blast while on duty at the Line of Control in Jammu and Kashmir in 2008.

“It is very important to face challenges life throws at us with courage and confidence,” Anandan told The Hindu from the Army Sports Institute, Pune.

After winning gold medals in 100m, 200m, and 400m (IT1 events) at the World Military Games in October last year, the Subedar with the Indian Army’s Madras Engineer Group and Centre, Bengaluru, made up his mind to focus solely on 200m keeping the Paralympics in mind.

Anandan intends to make best use of the time he now has after the postponement of Paralympics because of the COVID-19 pandemic. “I am confident of performing well in the selection trials and make it to the Indian team for the Paralympics.”