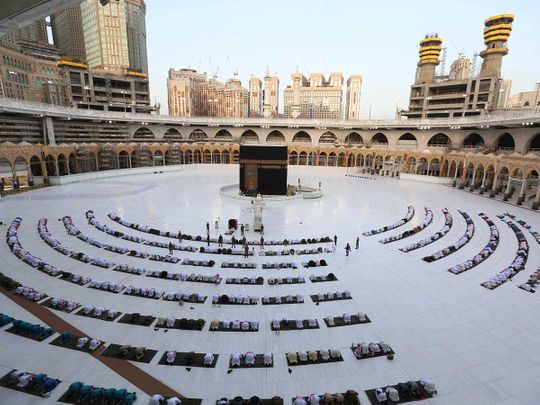 Dubai: Saudi authorities have set mandatory guidelines and health protocols that pilgrims need to follow while performing the rituals of this year’s Haj season.

The Kingdom’s National Centre for Disease Prevention and Control unveiled health a slew of protocols for the Haj season, as well as several general guidelines for health workers and practitioners regarding during the Haj season.

Two weeks ago, the Ministry of Haj and Umrah announced that this year’s Haj season will be limited in the number of pilgrims and confined to Saudis and expatriate residents, to ensure the safety of pilgrims and prevent the spread of the coronavirus pandemic.

The ministry said this year’s pilgrimage would be restricted to a very limited number of pilgrims of all nationalities who are already residing in the country, so that it does not exceed 10,000 pilgrims, while Umrah will remain suspended until further notice.

The move aims to ensure Haj is safely performed while abiding by all preventive measures to protect pilgrims and adhere strictly to the teachings of Islam in preserving our health and safety.

The new guidelines for Haj season are related to the use of residential buildings, food places, buses, and men’s barber shops, as well as with regard to Arafa and Muzdalifah, throwing stones (Jamarat), and prayers at the Grand Mosque of Mecca.

The general guidelines include the ban on entering the holy sites (Mina, Muzdalifah, Arafat) without a permit, starting from July 19, until August 2.

Pilgrims should not sharing personal tools and equipment such as protective equipment, communication devices, clothing, shaving products or towels.

Instructions included determining the number of people allowed to use elevators to ensure that the recommended social distancing is maintained, distributing hand sanitizers.

During congregational prayers, pilgrims must wear face masks, keep a safe distance and adhere to all protocols for mosques.

Other guidelines include cleaning environmental surfaces on a regular and scheduled basis, focusing on places where there is a high probability of contact, especially during the day, such as reception stations and waiting areas, as well as door handles, dining tables, seat rests, elevator keys,

As for dining places, the directives and protocols included providing drinking water and Zamzam water in individual and single-use containers, removing or disabling all refrigerators in the Mecca holy sites, and restricting meals to pre-prepared and packaged foods, to be provided individually for each pilgrim.

He directed the necessity of providing alcohol-based hand sanitizers in any place designated for serving food in a clear and easy-to-reach place. Emphasis on workers to wash their hands routinely and repeatedly for forty seconds at least every time during work shifts either using water or using an alcohol-based hand sanitizer for a period of no less About 20 seconds in the event that soap and water are not available, especially in the following times, and that employees work in groups or working groups in the form of shifts to reduce direct communication between groups.

Specifying a bus for each group and a seat number assigned to the same pilgrim during the entire Haj trip, commitment to the same seat for all pilgrims throughout the flight time, not allowing pilgrims to stand inside the bus during the trip, and allowing families to sit together according to the possibility.

Other protocols include allocating various doors for boarding and off-boarding buses, excluding people with physical difficulties who need assistance, stopping the bus until a complete disinfection is conducted if a passenger was confirmed to have COVID-19.

Providing hand sanitizers and sanitary papers in the passenger cabin, with a least three disinfectants distributed and installed inside each compartment.

The number of passengers inside the bus during the duration of the trip should not exceed 50 per cent of the total capacity of the bus, and maintain the physical distancing on the bus by following the recommended policy and leave at least an empty seat between each passenger.

Health protocols include that pilgrims must commit to residing in designated places and not to deviate from the path designated by the Haj trip’s regulator. They must wear face masks all the time while performing the Haj rituals.

Food provided during these rituals should be limited to the pre-envelope only, and the need to maintain social distancing between pilgrims.

As for distributing pilgrims to tents, they should not exceed 10 pilgrims per 50 square metre of the area of tents, while maintaining a distance of at least 1.5 metres between each pilgrim .

Other protocols include preventing crowding at public baths and ablution areas by placing floor stickers, and increasing the number of bathrooms or washbasins to ensure a safe distance of 1.5 metres is maintained between each pilgrim.

The protocols for stoning of Satan, the stone-throwing ritual, include providing pilgrims with pre-sterilised stones that are placed or wrapped in sealed bags. Regulating the throwing site, so that the number of pilgrims throwing stones at the same time does not exceed 50 pilgrims, while keeping a distance of 1.5 metres at least between each of them.

Other guidelines include providing sufficient face masks and sanitisers for all pilgrims and workers during the stoning trip.

The new protocols include certain guidelines for pilgrims while they are the Grand Mosque of Mecca, most notably is scheduling the pilgrims to perform ‘’Tawaf”, circling the cube-shaped Kaaba in a manner that guarantees a distance of at least 1.5 metres between each pilgrim and the other, and reduces crowding.

Pilgrims will be distributed to all floors to ensure the recommended physical distancing is maintained, reduce personal contact between pilgrims at the Great Mosque and prevent gatherings in general. Security men will prevent pilgrims from overstepping these barriers.

Specific entrances and exits will be allocated with to ensure the smooth process of pilgrims ‘entry and exit and prevent crowding and stampede.

Security men will oversee the regulation of pilgrims while using Zamzam water coolers where floor stickers will be placed to ensure social distancing. Pilgrims will not be allowed to use their own containers to fil with Zamzam water. They will be prevented from bringing food to the Mecca campus or eating outdoors.