Hamilton review: Play it on a loop 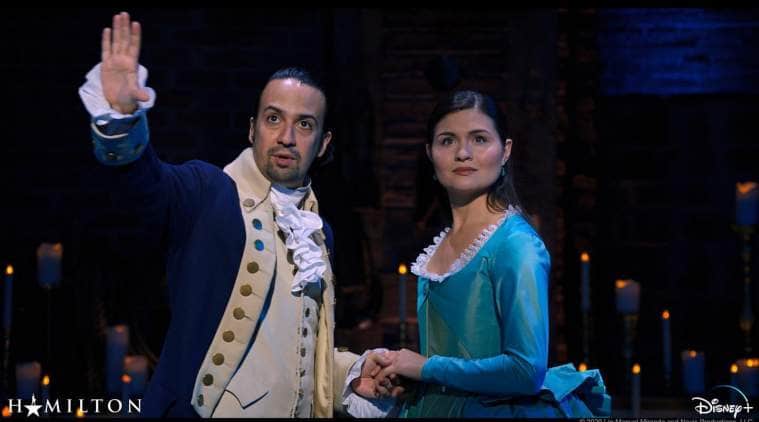 The year was 2016, a year after Hamilton: An American Musical had its off-Broadway premiere. It was already a pop culture phenomenon, and Lin-Manuel Miranda was already a household name. James Corden, the popular host of the Late Late Night Show was making an appearance on The Late Show with Stephen Colbert. Corden was going on and on about being nervous to host the upcoming Tony Awards, the highest awards for excellence in broadway theatre. Colbert, being a good samaritan, suggested a quick fix for the ordeal of learning lines and performing. “If you forget all your lines, just say Hamilton”. Corder, visibly relieved, agreed. “I think it’s (Hamilton) a once in a decade or maybe even longer type phenomena and I feel very very lucky to host the show in a year where a show has sort of crossed boundaries into the ether of public life….you feel like there will be life before Hamilton and post Hamilton, gushed Corden who on a regular basis has access to the who’s who of the global music industry, after all, he is the creator of Carpool Karaoke. While not all of us have had the luxury to watch this musical in its element, live on stage, Disney Plus Hotstar is streaming it as a two-hour forty-minute musical drama, divided into two parts, Act I and II, which has been cut from various performances of Hamilton while it was staged at the Richard Rodgers Theatre in New York in June 2016.

But this is Hamilton we are talking about, a musical which tells the story of Alexander Hamilton, one of the Founding Fathers of America. Stories about politicos and Founding Fathers can often be boring, sanctimonious lectures. Not this one: This tale is replete with swag, rap and hip-hop battles and show tunes. Not to mention, it’s quite something to watch the ilk of Thomas Jefferson, George Washington sway with such ease wearing tight britches, knee-length socks, ruffled shirts and heavy topcoats.

We meet an orphan Alexander Hamilton, who comes to the US from the Caribbean island of Nevis, and we chart his journey as he becomes an aide-de-camp to General Washington, his marriage with Elizabeth Schuyler and how he contributed to the cause in the American Revolution. We move onto the Second Act, where Hamilton truly ascends to power and is appointed the first-ever US Secretary of the Treasury and is an important voice in the George Washington administration. The achievements of Alexander Hamilton have been well documented, his contribution as the founder of the modern finance system and his strong support of the US Constitution, is all entrenched in the public domain. But its everything else that makes this musical drama into the pop-culture phenomenon that it has become — right from the very catchy and hummable music, to the eclectic choreography — Hamilton is a winner on all fronts.

Normally cabinet meetings and policy-making decisions are often synonymous with long drawn out speeches, jargon and statistics that most people cannot decode. But a rap battle to discuss financial proposals, or a matter of foreign policy? It’s a delight to hear Thomas Jefferson and Alexander Hamilton debate the merits of assisting France in their conflict with Britain, as they throw shade at each other and call each other out. “He knows nothing of loyalty, Smells like new money, Dresses like fake royalty, Desperate to rise above his station, Everything he does betrays the ideals of our nation,” rants Jefferson, the Secretary of State, against Alexander Hamilton. Hamilton, a seasoned scholar, who had dabbled in law in his early years, doesn’t pull his punches. “You must be out of your Goddamn mind if you think, The President is gonna bring the nation to the brink, Of meddling in the middle of a military mess, A game of chess, where France is Queen and Kingless.”

Hamilton was hailed as a musical which was a story of an ‘American then, told by America Now’. We saw a completely diverse cast, black, brown and all other ethnicities, play roles that have always been portrayed by white actors. Lin-Manuel Miranda upended history, by making fiscal reforms and national debt cool. Miranda, who has composed, written and created this musical, makes you feel his agony as he navigates the corridors of power, deals with political subterfuge, falls and then rises again, like the proverbial phoenix from the ashes — is there anything the man can’t do? Hamilton’s rivalry with Aaron Burns is a key cornerstone of the musical, and gets sufficient stage time, but it doesn’t overpower the narrative. The format of a musical could seem slightly new to some, but once you get in the flow of things, you wouldn’t want to won’t miss a beat.

If only History was taught this way in our schools. Then for sure, we would know the three different battles of Panipat. A rap would be a nice way to learn the minutes of the first-ever session of Congress in 1885. Apart from the sheer path-breaking theatrical brilliance of Hamilton, the musical’s template should be replicated the world over. Lesser-know heroes can have their moment in the sun, and break away from the otherwise staid and uni-dimensional portraiture that is reserved for them in history textbooks. A musical on the life and works of BR Ambedkar, topped off with a rap on his notes of the first draft of the Indian Constitution? Why Not. This would be a welcome break from the otherwise holier than thou hagiographies that Bollywood seems to be churning out on an alarmingly regular basis.

Coming back to the musical, the two hours forty minutes slide away without an effort, as you listen to the songs belted out with such sincerity, you see the cast sweating, heaving and panting as they perform with electrifying energy. Watching all of them on your screens at home, might be a far cry from watching them on stage, but in these socially distant times, it’s once of the best things you can experience, right from the comfort of your couch. Watch Hamilton, and chuckle every time Alexander Hamilton makes a point through a rhyme, or successfully takes down his rival through a witty verse or two. Maybe it can be a new drinking game, which you can play virtually with your friends.

James Corden had ended his bit about Hamilton by saying that “You feel that there will be a life pre and post Hamilton in the world of musicals….”. Well, we end with – there are people who have experienced Hamilton, and those who haven’t. Which one would you rather be?