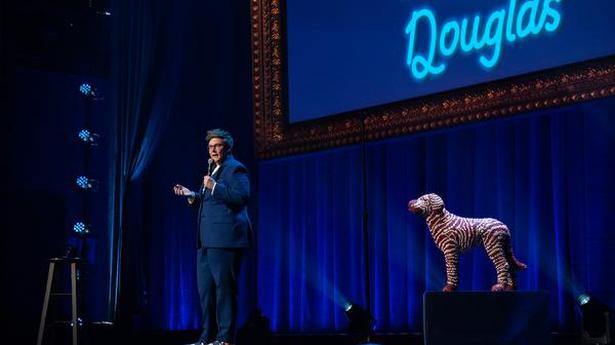 For the first 15 minutes of her new special Douglas, Hannah Gadsby gets into a lengthy and detailed explanation of her set. Admittedly, she has had to trim material to fit the hour-and-something show. There’s a peppering of a couple of lectures, some humour about American-isms, a bit of healthy needling of the patriarchy and a lone Louis C.K joke among other subjects. However, through it all, while she’s setting expectations, Gadsby promises her audience they’re in for a treat.

You see, Gadsby ‘is all out of trauma’ after her wildly successful prior special, Nanette (2018). She then quit comedy, but the 42-year-old Australian didn’t anticipate the show’s meteoric popularity. She had put all her ‘trauma eggs in one basket’ and had she known better, she’d have budgeted it. There could have been a trilogy! Douglas, named after her dog, starts off shaky. It’s a far cry from Nanette where the Australian comedian quickly wormed her way into millions of hearts. That’s not to say her initial diatribe bored. It was, as Gadsby deliberately intended to encourage people to go beyond the surface. Diagnosed in 2015 with autism, the 42-year-old wanted to reward audiences for sticking around. Just like you’d do with someone on the spectrum. A self-declared, romantic comedy about autism, the comedy special – it’s safe to say – more than recompenses viewers.

There are scores of comedy specials floating on the interweb. But Gadsby’s charisma lies in her ability to be excruciatingly vulnerable to an audience with a swagger that’s both self-assured and relatable. She repeatedly returns to her punchlines, ensuring continuous rapt attention. There are ‘puffer fish’ moments – things that annoy her – which includes paleo diets, the while male privilege of Where’s Waldo? (he should have to find himself just like the rest of us!). Other times she recounts hilariously poignant memories of being undiagnosed on the spectrum. And that single joke about the red-haired misogynistic comedian is every bit the mic drop moment she guarantees.

Nanette, much loved and loathed for its intense truth bombs, was more a farewell filled with pathos than comedy special. Still, it was hilarious and a tight set that couldn’t have been better if it tried. The comedian couldn’t possibly do better. And yet Douglas – also named for the the recto-uterine pouch in a ‘biologically female body’ – did just that. With her new show, Gadsby has returned and hopefully, she won’t ever think about leaving again.

Douglas is currently streaming on Netflix