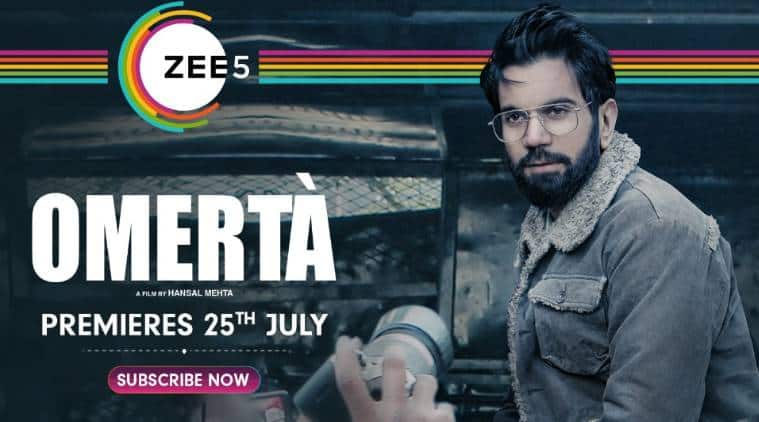 Rajkummar Rao said Omar Saeed Sheikh was one of the most challenging characters he has ever played on screen.

“Playing Omar in Omertà is certainly one of the most challenging characters I have ever played on screen. It drained me completely both emotionally and physically. I could never have imagined that playing this part would mentally take me to such dark places. It’s a journey of one of the most deadliest terrorists of our times and Hansal Sir pushed me out of my boundaries to explore. It is great that ZEE5 will premiere this film digitally, which the world will be able to see,” Rajkummar said in a statement.

A gripping tale about a deadly mastermind’s journey, based on a true story.

Hansal Mehta remarked he is looking forward to the digital premiere of Omerta.

“This hasn’t been an easy film to make with multiple locations, adverse weather conditions and often limited resources. What we had in ample measure was heart. The entire team put their heart and soul into every minute of the process throughout the way. I would like to extend my gratitude to an exemplary cast and crew for their efforts and perseverance. This was my 5th collaboration with Rajkummar Rao and perhaps one of his biggest challenges as an actor. After having made films like Shahid, Citylights and Aligarh together, we were exploring a character’s inner darkness through this film’s protagonist Omar Sheikh. This is a film I am very proud of. And as the film had predicted then, Omar Sheikh with all his complicity in some of this centuries’ most heinous acts of terror is on his way to acquittal by Pakistan’s apex court. Omertà is an important document of our times, a thriller that is finally set to release on ZEE5 and I am really looking forward for the world to experience Omertà,” Mehta said.

During a Facebook LIVE with The Indian Express in May, Hansal Mehta had mentioned how his films Aligarh and Omerta were fit for an OTT release.

“OTT is a great way for films to be seen. Particularly, some of the films I made, an OTT release would have been ideal for them. Like my film Omerta or Aligarh, I don’t think they were meant for theatrical release. The two would have been great OTT releases,” the director said.

He also said that “OTT will be a way forward” and for him, the platform is “liberating.”