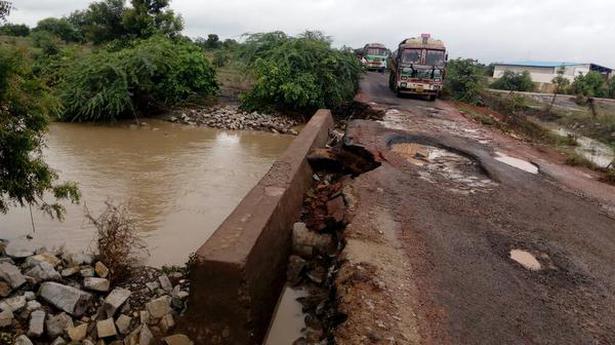 The road connectivity between various villages in Chincholi taluk of Kalaburgi district and on the Karnataka -Telangana border was cut off as the bridges on the major connectivity stretches were washed away due to incessant rain in the last three days.

Two bridges on Chatrasal – Burugapalli road and Garagpalli – Bhaktampalli road were severely damaged. The incessant downpour on Thursday and Friday night caused floods in the local tanks and rivulets and the flood water breached several causeways, snapping road links at more than 15 places in Chincholi taluk.

Villagers in low lying areas were forced to vacate after the flood water gushed into houses. Around 45 houses in Chincholi town, Ainapur and Chandapur were waterlogged.

As a precautionary measure, the vehicles were stopped from plying on the bridge across the Kagina river near Malakhed village as the bridge faced the threat of coming under water.

Fishermen to the rescue

The fishermen on Friday rescued eight people who were stranded in Kagina river due to the sudden rise in water level.

Eight people stranded on the banks of river Kagina were rescued by a team of fire and emergency officials with the help of local fishermen after an operation that lasted for four hours.