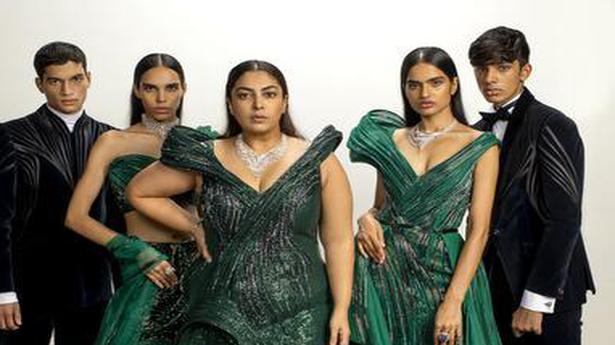 What to expect at India’s first pandemic fashion week, with two shows down and 10 to go?

India kickstarted its first digital fashion week today with India Couture Week 2020, joining other fashion weeks in Paris and Helsinki that made their debut a few months ago. Gaurav Gupta, who opened the schedule on Fashion Design Council of India’s (FDCI) website and official social media platforms, didn’t disappoint with his beautiful sculpture statement gowns, newer forms of sari gowns with structured wings, new colours like cerise and dramatic shimmer. There was sculpting on the jacket for men as well, and a lot of velvet. With some upcycled archival pieces, it was both nostalgic and futuristic. It was what Gupta had promised earlier in the day, but the bigger narrative? His unconventional models.

Mouthing “my name is love”, they underlined the ‘differences and inclusivity’ theme of the film that Gupta insisted was not a campaign but a movement. Among the models was a young lesbian couple, Anjali and Manauti from Gurgaon, Vee a trans-male and Anjali Lama, India’s first trans-female supermodel. They were joined by equally graceful and confident beauties from Jharkhand, Assam and Haryana. “I thought of love and something we have all been reflecting upon during the pandemic,” the couturier had said before the show. For those who demanded more visuals or couldn’t wait till the next day to make an appointment, Gupta’s online store, launched earlier this month, seemed prepared. After all, that is one advantage of going digital, by reaching a larger audience and converting interest to sales. Other ICW participants like JJ Valaya and Manish Malhotra have also introduced e-stores recently, while Amit Aggarwal will launch his alongside the show on September 19.

Man at the helm

Sounding purposeful about driving the first such event in the country, FDCI chief Sunil Sethi says they were “left with no option and it was the need of the hour”. Initial plans two months ago included CGI models, he reveals, till it became apparent that there was the possibility of having physical shows, as long as Covid-19 safety measures were observed. That said, the showcase will be online-only, with 12 leading designers on board.

It has seen designers over the last few weeks put together 10-12 minute long videos, shot in various locations – in their own studio or farmhouse (JJ Valaya), or at an old heritage building (Rahul Mishra, at the secluded Tijara Fort Palace in Rajasthan). Sethi says the designers were given the option of shooting at the 15,000 sq ft FDCI office, which was turned into a mini showing area, with fashion week-ready backdrop, lighting, backstage etc. Suneet Varma, who is scheduled to show on Saturday chose to go with that. “A lot of them wanted to do it their way and we were fine with it. Some were influenced more by the Paris Fashion Week (in July), and they wanted to experiment. I know one designer had taken a bus full of 50 people to shoot in a heritage hotel. Some had specialists flown in from different parts of the country, from videographers to stylists. To each his own,” says Sethi, adding that the rules this time primarily involved protective measures against Coronavirus and a time limit for the shows (“as the attention span on social media is not that much”). Budgets, he says, varied from Rs 10 lakh to Rs 40 lakh for designers, with some opting to work with eight models, while the count for others went up to 25. Of course, costs can skyrocket with custom venues. And model hunts. For Gupta, shooting over two days with 18 different models also involved “a lot of casting to find beautiful stories and dive into the pulse of the new, young India”.

While digital fashion shows at Paris Fashion Week and elsewhere have come in for some flak with criticism that digital is flat, both in content and viewing, another popular ICW participant, JJ Valaya, is practical when he says, “The digital experience cannot replace a live show. Those 20-25 minutes of anything live have a different kind of energy. Perhaps we ask too much of the virtual fashion week by assuming we are going to get the same rush. We are not making art cinema, which takes two years to complete, with retakes and edits. Nor are we going to be nominated for an Oscar. This is, simply, a virtual representation of the latest couture line”.

Call it a success?

Echoing what several designers have been saying, he reminds viewers that the show has relevance to Indian couture, where the focus is essentially bridal. Sethi is confident that “there will be a newness of design, with archival elements possibly in terms of silhouette or colour”. It seems a few designers wished to revive red as a traditional colour. Amit Aggarwal has been inspired by the beauty of nature, and the result is seafoam, deep forest green and sky blue as key collection colours. How differently have they approached this digital show when compared to earlier Couture Weeks? Well, Suneet Varma says his show is very much part of his brand DNA, with “sensuality and sexuality” but that the pandemic calls for a newer thought process. “My shows are known for its peacocks and palaces and extravagant sets. But I thought I would clean the slate. There isn’t a single chandelier or any distractions and we have created wonderful nuances in an idyllic grey space, perfect for the models and clothes,” he concludes.

101 reasons to turn back the clock

Marie-Cécile Cisamolo is no stranger to exquisite craftsmanship. “I love my job, even on a Saturday,” goes an Instagram post, as she tries out...
Read more