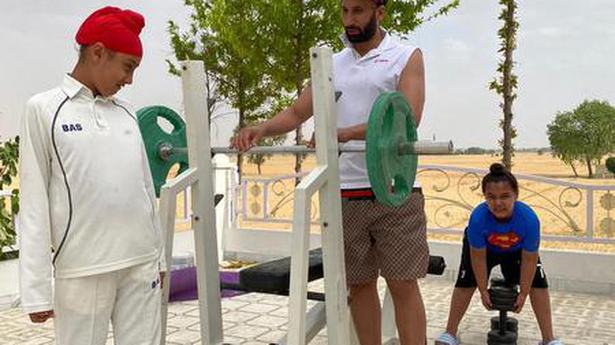 Sardar Singh was one of the fittest players in the Indian hockey team and the former India captain has lately taken to sharing his workout sessions on the social media. The ongoing lockdown has given him lot more time to do so.

The pandemic hit soon after Sardar returned from Canada. He spent a few days in Chandigarh before shifting to his ancestral village in Sant Nagar, Sirsa. “The lockdown meant your couldn’t even leave your flat in Chandigarh. Here it is easier and safer,” Sardar told The Hindu.

Along with his parents, elder brother Didar Singh and his family, Sardar is also reconnecting with his spiritual roots.

“What I have learnt is what our Guruji (the spiritual head of Namdhari sect) always said — only the man who remembers God — not to ask for something but simply to be thankful and seek blessings — will be able to stay strong and survive any crisis. The last few years I had lost some touch. Now I am slowly trying to get back, starting and ending the day with a prayer,” Sardar said.

About his workout videos, Sardar said it was mainly to encourage people for fitness through example.

“That’s what I used to do on field also, lead by example. But on social media, when a player puts up something, he keeps thinking of that only all day and focus goes for a toss. That’s why I kept off it earlier. But now I have time.

“Once this is over, I plan to complete my police training (he is with Haryana Police) and may think of getting into coaching also (he is already a selector with Hockey India). Let’s see,” he says.

As for the current situation, the Padma Shri and Khel Ratna awardee admits there is uncertainty.

“As of now, no one knows when things will get normal, or will it be back to old normal at all. But one thing is sure — only if you are healthy you can go ahead in future, whatever it may be like,” he said.