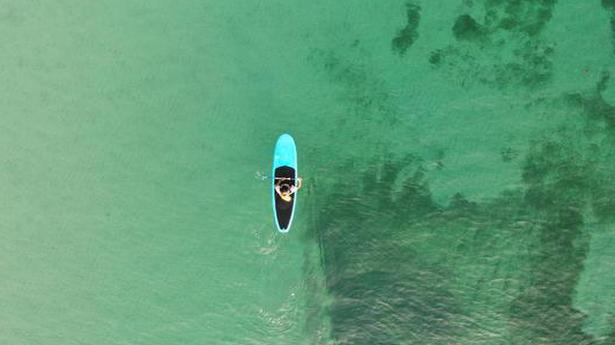 Surf Turf — the bed and breakfast and surf school in Covelong — is currently closed. Normally bustling with novice and expert surfers at this time, the airy property, facing the Bay of Bengal, is awaiting the government’s orders to soon reopen. “The whole of last month we have been getting calls from people asking when we will reopen,” laughs Arun Vasu, founder of Surf Turf.

With countries, and even States sealing borders, and with compulsory post-travel quarantines, Arun is positive that domestic tourism will grow now. No wonder staycation is one of the biggest holiday trends currently.

Given the whole concept of social distancing, open spaces such as these are a good idea for staycationers, believes Arun, and adds, “Plus the activities offered here, like surfing and standup paddling requires one person per board, he says.

The rooms have been revamped and now have attached bathrooms so clients don’t have to worry about sharing a common space with anyone. Surf Turf gets a fair share of guests from Delhi, Bengaluru and Mumbai apart from Chennai. “We are avoiding big groups so it will be a little quieter, and we are encouraging those who come to stay longer,” says Arun.

Further down, along the coast at Quest Adventure Sports Academy, Rameshwaram, new guidelines are being implemented in terms of hygiene and sanitisation. The homestay and academy, that is shut temporarily, gets clients from all over the country. Some prefer to stay there and pick up scuba diving and other water activities, while others come on a per day basis and try them out. “There is pent up demand; people want to travel as soon as it opens. Some of them want to stay with us for two weeks. We have asked them all to be prepared with their COVID-19 certificates,” says Jehan Driver, managing director of Quest Adventure Sports Academy. All the activities here are outdoors. “We work with small numbers of people and spend most of the time in the ocean, away from the crowd,” he says .

Mumbai-based content writer Krish Rajendran was scrolling through his inbox, taking a break from an exhausting workday last month. He saw a series of travel and accommodation cancellations in Europe. He had waited for five months for his 22-day, first-ever Euro trip to begin on April 1.

“In hindsight, it’s like a cruel April Fools’ prank,” he says. However, instead of Italy, Krish took a week off work, to holiday on his couch.

The COVID-19 pandemic has forced the world to cancel vacations, reunions and business trips this year. The beleaguered travel and hospitality industries have been hit with waves of cancellations. Now, as countries cautiously reopen after many months of lockdowns, people are looking for safe ways to return to some semblance of normal life. .

Resurgence of a decade-old trend

Staycation’s popularity has peaked after the pandemic began (according to Google Trends, at least) due to the restriction and risks involved in long-distance travel. For instance, the percentage of bookings made on Airbnb increased from one-third in February to over a half of all bookings in May.

The tourism industry, which has suffered a sudden yet savage blow, is counting on this surge in staycations to recover. More and more luxury hotels, resorts, homestays and other players are designing staycation packages. This could, in turn, control the damage of the floundering economy as well.

Staycations, however, are important at a personal level, too.

With the pandemic triggering layoffs and pay cuts, employees — especially millions who work from home — perhaps feel the need (or are asked) to work longer and harder. In this context, vacations seem like an indulgence. But, given the spike in depression, a short break now may be more important than ever before.

Some people, due to strict travel restrictions and safety concerns, are okay vacationing at home. But others, like Manjula Ramakrishnan, who works in a financial advisory firm in Bengaluru, prefer a nearby getaway.

“I was okay with the lockdown for the first month or so,” says Manjula. “Initially, it felt like a good break. But after a point, you want to step out and just breathe fresh air.” So, Manjula and her daughter drove to the Porcupine Castle resort atop a hill in Coorg. “It was good to surround ourselves with greenery and get some clean air after being locked inside the house for almost two months.”

Porcupine Castle is also offering a ‘workation’ package for guests who wish to work, looking at the lush greenery and listening to bird songs. It includes a 10-day stay, high-speed WiFi and a conference room. It costs ₹2,500 per night compared to their usual room rates starting from ₹6,500.

Anila Paul, the resort’s marketing head says, “Since we launched this package (on June 16), we have been getting around 150-200 calls every day, which is way more than what we expected.” Though 80% of the enquires are from Bengaluru, she adds, “People from Chennai, Mumbai and even Singapore checked for the availability of rooms in August.”

Working from home is likely to continue even after the COVID-19 crisis abates. So, millions of employees can afford to go on staycations like this without worrying about taking leave. The pandemic, hence, hasn’t just changed the nature of work; it has changed the way people vacation as well.

Bengaluru-based lawyer Anil Kumar, who signed up for Porcupine Castle’s workation package, says, “A prolonged work from home scenario can result in cabin fever. There should be something to differentiate work and home. So, the resort, that way, was a good change of scene for me and my wife.”

Worldwide, it would take a while for the tourism industry to recuperate. HVS-Anarock, a global consultant for hospitality, estimates that India’s hotel industry will lose ₹90,000 crore during this calendar year. Hoteliers and owners of homestays and resorts are keeping their expectations low for the rest of the year. But they all count on intracity and intrastate bookings.

Visheshwar Raj, the Vice President and General Manager of The Oberoi hotel in Bengaluru, says, “Returning to some form of normalcy and then growing the business further will take time. In the immediate future, business will mainly come from within the city and the state.” Since reopening on June 8, nearly 70% of The Oberoi’s bookings have been from Bengaluru residents. “Staycations are going to be a very productive segment for hotels for many months to come as International travel will probably restart only next year,” he adds.

Hubloft, a Kochi-based vacation rental service, gets one-fourth of their annual bookings from abroad and about 35% from Kerala. But since reopening after a lockdown on June 8, all bookings have been from within the state. Raiyaan Nayeem, Hubloft’s founding partner, says, “We are marketing ourselves as a place to get together. Most of our enquiries are from youngsters — a bunch of friends or couples. They can’t go to cafés, restaurants and pubs. So, they look to rent private villas.” Hubloft has relaxed its cancellation policy to encourage more last-minute bookings.

Safety and hygiene will henceforth be crucial in deciding hotels or resorts. “People now wouldn’t mind paying extra for the hygiene which they would have before COVID,” says Raiyaan. Hotels and resorts also highlight their safety measures along with their packages. All of them are trying to minimise contact as much as possible.

“Even if a group books just three rooms in a six-room villa, we don’t rent the other three rooms; we lock them now. We have also instructed our staff to reduce their contact with the guests,” says Raiyaan.

The pandemic also seems to have created a demand for unique and private staycation spots. On June 30, A Travel Circle launched in India, promising customised luxury staycations for its customers. Its founder Pritish Shah says, “The changing travel expectations in the new normal world align very well with our offerings — private villas for social distancing, private jets to avoid commercial airports, highest standards in safety with our carefully selected hospitality partners and other service vendors.”

Raiyaan’s Hubloft has started houseboat rentals in Alleppey. “We get about 100 enquiries every day. And, most of them are looking for a one-day stay, which costs ₹8,000 for a couple (including food).” It’s definitely more expensive than meeting your loved ones at a café. But how often do you get to share a sunset with them with almost-still water gleaming beneath?

What to do while staycationing?

Catch up on your sleep: Stress and a hectic WFH schedule have blurred the divide between work and leisure, day and night. Take a break, turn off the alarm, switch off your phone and relax.

Learn something cool: There are skills like juggling, baking cookies and basic HTML, which you can master even on a one-day vacation. (Check out dayzeroproject.com).

Binge on books/shows/movies: The classic vacation routine. You know how to do this.

Clear the clutter: The best thing about a hotel room is not luxury; it’s order. By now, you must have heard of Marie Kondo’s famous KonMari method of tidying things. Check it out, if you haven’t.

Niksen: Do nothing. That’s what this Dutch word means. We are often compelled to do something. So, spend time staring out of the window, listening to music or just sitting on a chair. These actions, without purpose and the pressure of productivity, can help manage your stress and prevent burnouts.

Several European countries are gradually easing their travel restrictions, which is much-needed oxygen for the tourism industry. Yet the Europeans are opting for staycations due to the governments’ advice to avoid international travel and the fear of the still ongoing pandemic.

France’s Environment Minister Elisabeth Borne told France Inter Radio last month, “We are absolutely not suggesting that the French reserve their holidays abroad. This year, the idea is to holiday in France.”

Munich-based tour operator FTI Group observes a demand for domestic holidays in Germany. “Bookings by German holidaymakers in their own country are well ahead, ” the group’s director Ralph Schiller told AFP. He added there’s a “clear upward trend” in stays of at least one week compared to last year.

It’s a similar scenario in the US, which has the highest number of COVID-19 cases. Hotels and resorts are counting on staycationers to keep them afloat. In Canada, Ottawa mayor Jim Watson encouraged the residents to consider a “staycation” this summer to support local businesses and kick-start the tourism economy.

In the UAE, people who had to cancel their international holidays are booking private luxury villas after the lockdown restriction was eased. The Dubai Chamber of Commerce & Industry observed a surge in Internet search for “staycation” in May. The rise coincided with the reopening of the city’s hotel beaches and the Eid holiday.