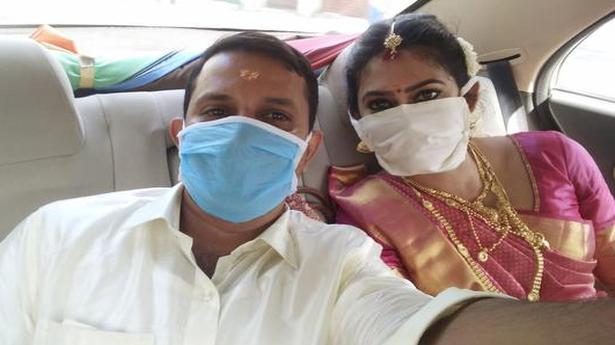 Dehradun-based Animesh Debnath recently married Nilu Roy in Bhopal, with his parents participating in the celebrations, singing and dancing from Silchar, Assam. “Due to lockdown restrictions, it looked like our May wedding would have to be postponed. But I got in touch with Shaadi.com. and they made it possible with a priest in Raipur officiating over the marriage. Everything was online, the sangeet, the bharaat… and our relatives witnessing the wedding,” says Nilu.

Relatives witnessed on Zoom the online nuptials of Animesh Debnath and Nilu Roy, which was organised by Shaadi.com
| Photo Credit:
special arrangement

Meanwhile in Kochi, actor Miya George got engaged to Ashwin Philip in a quiet ceremony at the bridegroom’s home last weekend. The food was homemade and the guest list was limited to 20. Miya George and Ashwin Philip got engaged in a quiet function at the groom’s home in Kochi
| Photo Credit:
Special arrangement

Despite the challenges of the ongoing pandemic, weddings have been held through the lockdowns all over the country. Realising that celebrations in the post-COVID-19 era require new systems and innovative ideas, planners have been equipping themselves for today’s tech-driven, intimate ceremonies and celebrations.

Delhi-based Meher Sarid, an event planner, was supposed to organise a big wedding reception in Delhi later in the year, for an NRI family in Singapore. However, the wedding, to begin with, did not go as planned. “The bride of Japanese and Indian parentage was in Singapore with her in-laws when the lockdown hit, and the bride’s parents couldn’t make it,” she says. 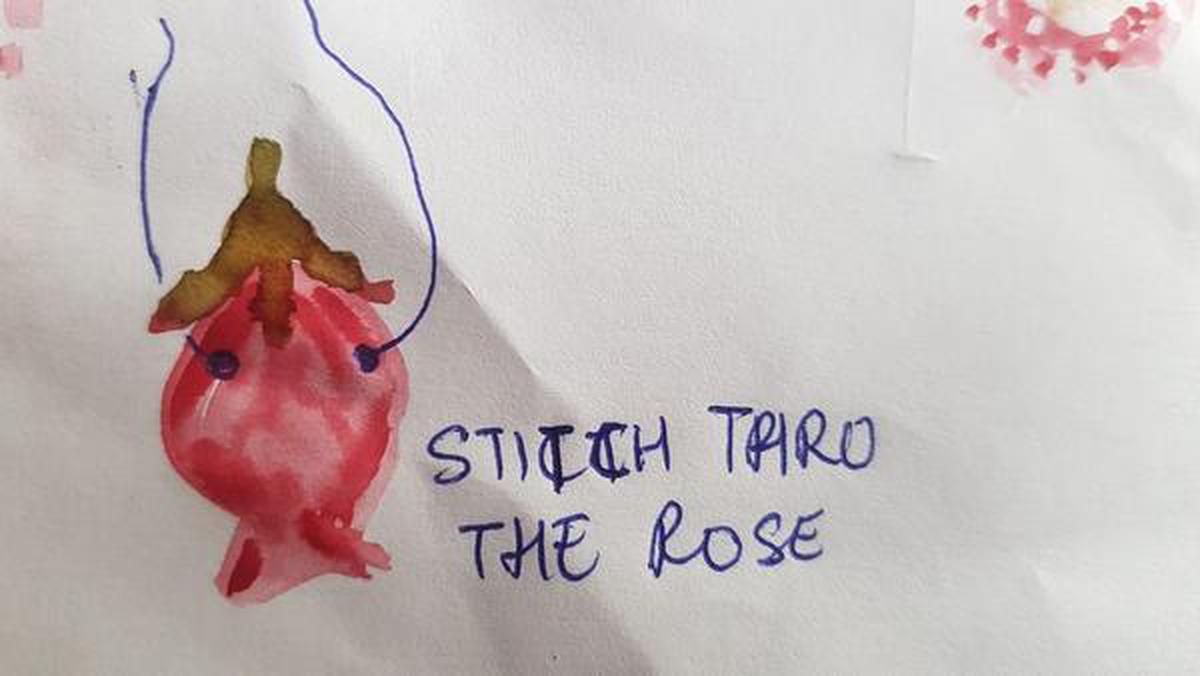 Delhi-based Meher Sarid’s drawings to help a client for a DIY wedding in Singapore. She WhatsApped it to the bridegroom’s mother
| Photo Credit:
Special arrangement

The mother of the groom contacted Meher for suggestions on how to make the registered wedding with five people memorable. Via WhatsApp Meher showed the family how to decorate the registrar’s table and the couple’s four-poster bed, all in red, maroon, and gold. “I told her how to thread the flowers. They scattered petals all over and planned traditional wedding rituals. The bride wore her mother-in-law’s wedding salwar suit and the groom wore a sherwani with a pagadi. They fashioned a Just Married sign out of an old cardboard box, put it on the car and took it for a short ride down the driveway,” she adds.

In April, in Thiruvananthapuram, Mathangi S sought the blessings of her elders virtually, before her father, T Sasimohan, led her to their living room via WhatsApp, where she got married to Vimal Kumar SV, while music played on a laptop. Although less than 10 people could attend, the ceremony was streamed online so that her elder brother in Bengaluru and relatives could participate. Sasimohan, whose neighbours helped arrange the flowers, garlands and decoration for the backdrop, suggests a return to small, intimate weddings this year.

Wedding planners emphasise that such DIY marriages might become the norm in the time of the pandemic. Matrimonial site Shaadi.com has even come up with ‘Weddings from home’, a package to help guide couples who want to tie the knot despite the lockdown. Relatives witnessed on Zoom the online nuptials of Animesh Debnath and Nilu Roy, which was organised by Shaadi.com
| Photo Credit:
Special arrangement

“It is a social initiative that we do without any charges. We organised three such weddings and one had about 700 people from eight countries witnessing the wedding on Zoom. There was a jazzy sangeet, mehndi function… the works. It was all digital with a beautician advising the bride how to wear her sari and apply make-up,” says Anupam Mittal, founder of Shaadi.com.

Adhish Zaveri, marketing director of the website, says although many marriages have been postponed due to the pandemic, they are in talks for organising four to five online weddings in June. A pandit in Raipur conducted the online wedding of Animesh Debnath and Nilu Roy, which was organised by Shaadi.com
| Photo Credit:
Special arrangement

​​On March 11, a week before lockdown was announced, Divya Vithika Wedding Planners of Bengaluru organised a wedding that conformed to stipulations of social distancing. Says Vithika Agarwal: “We had hand sanitisers and masks and we made sure people that people maintained social distancing.” Neither Vithika nor Sarang Naroth, director of Aira Wedding Planners, have accepted any weddings to be conducted during the lockdown.

Moreover, splashy ceremonies could become a thing of the past. “We will probably go back in time and learn to cherish intimate weddings in the backyard or on the terrace with just the family around,” says Rahul Ganapati of Razzle Weddings and Ajay Agarwal of Creative Plus Entertainment Network in Vishakapatnam.

With no precedent to learn from however, conducting weddings at this time can be challenging. Vidya Singh and Rekha Rangaraj of Chennai-based Sumyog admit that the entire business has been tied in knots as a result of the pandemic. “Last year, we were working all through the year. We only deal with one client at a time for bespoke weddings. In 2020, we had three events for one client in March, one in April and two clients with multiple events in June. Now, all events have been put on hold indefinitely. Some NRI clients have contacted us but the situation is quite fluid as travel has become so difficult. As a result, many of those to whom we outsource work for décor, flowers, music and so on have no work at all,” says Vidya.

According to Vidya, Sumyog has devised extensive plans for weddings that follow the complete protocol for safety, including masks, sanitisers, LED screens at the venue, separate entry and exit point for invitees, transport for guests, accommodation and so on.

Small guest lists do not necessarily mean extended family and friends can’t join in the celebration. “We had parents who are planning a marriage with 50 guests. They have decided to have designer boxes filled with sweets to be delivered to all the people they would have invited in the days before COVID-19,” says Diwia Thomas of Kochi-based Papertrail. The boxes contain a mask, sanitiser and snacks like samosa, pastries and Indian sweets. In the same way, Nila Caterers explain that instead of elaborate buffets, guests are given takeaway boxes with biriyani or fried rice and curry. A table arranged by Angamali-based Swastika is in tune with the protocol for social distancing
| Photo Credit:
Special arrangement

Sofia Mathew, who runs Watermark in Kochi, says that ideally weddings should be postponed to 2021 when there will be more clarity about the situation and travel plans can be confirmed.

“However, if they feel the muharat can’t be postponed, we are advising them to go in for several small functions and invite different sets of guests for those,” she says. Delna Davi of Swastika events in Angamaly conducted a marriage and a baptism by having small groups of guests inside the church, at home and at a hall.

Ram C Menon of Kochi-based Impresario also believes this could be a trend, with couples opting for outdoor venues such as beaches in Kovalam, the waterfront in Kochi, scenic lakeside spots and open grounds in the district, with functions at home. Later in June, Impressario is organising two such weddings at outdoor venues in Kochi.

Jayashree Shuba Kumar, whose son, Ram Shankar, had a quiet June wedding at the bride’s house in Thiruvananthapuram, says: “It was a warm function and had the charm of yesteryear weddings, when such functions were always held at home. Perhaps, it is time to revive simple weddings.”

Previous articleBobby Joe Morrow, the 1956 Olympic sprint champion who lost his way | Andy Bull
Next article‘Spelling the Dream’ review: How do you spell ‘s-u-c-c-e-s-s’?