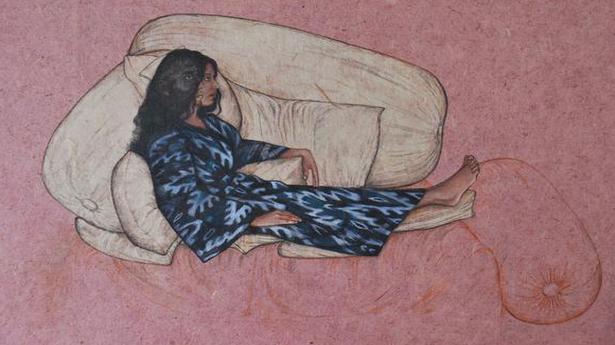 An art showcase titled ‘Confluence-Sangam’ will open on June 19 at Heidelberger Kunstverein (The Heidelberg Art Society), one of Germany’s oldest art associations. On view will be the artworks of Hyderabad-based Varunika Saraf along with Nadira Husain who divides her time between Berlin and Paris, and US-based Amina Ahmed. Confluence will have the three women artists exploring a melange of techniques that connect the past with the present.

Varunika recalls the initial conversations with Nadira in late 2019: “We weren’t sure of the direction this show was likely to take. But we found a few commonalities in our views towards art and the world. Nadira’s paternal family hails from Hyderabad and she uses kalamkari and ikat in her work.”

Soon, Amina joined them and the trio got a nod from Heidelberger museum, known for its non-commercial approach to art. Two days before Varunika had planned to courier her artworks, the COVID-19 lockdown came into effect in India. There was uncertainty until the lockdown was lifted, after which she managed to send across unframed works stacked on one another, in a package size a little larger than A4, to Germany.

During the lockdown, the conversations between the artists continued. The new connections and the hope of an art showcase, admits Varunika, gave her something to look forward to, in an otherwise bleak scenario. “One tends to feel isolated as an artist, more so during a pandemic. It was reassuring to know that fellow artists had faith in me,” she says.

Varunika will be displaying 16 artworks in her series titled ‘Caput Mortuum’, through which she bridges the past and the present, to highlight political and social issues, particularly the rise of violence in South Asia. “In Latin, Caput Mortuum stands for ‘dead head’, and in alchemic terms it denotes ‘worthless remains’ — the residue at the bottom of the heating flask after the other elements are sublimated,” she explains.

She used a brownish red base pigment in her watercolour works to allude to the ‘dead head’ colour that bleeds through lush, verdant green surface, the ‘worthless remains’ or injuries of the past seeping through the cracks of time to shape our present. She does this through a style that reinterprets Mughal miniatures.

In her art practice, Varunika often draws from her observations of both history and current affairs to portray the violence against the marginalised in society.

Techniques of dyeing, appliqués, embroidery or block-printing come through in her work occasionally. Elaborating on how the art world has been accepting of this blurring between craft techniques and fine art in the last decade in India, she says, “Women artists have been at the forefront of blurring the divide between craft and art,” referring to the scenario that emerged in the 1960s and 70s in the US and subsequently in India.

Also on view will be her 2016 work, a self-portrait inspired by an Inayat Khan painting done for Emperor Jahangir, a watercolour on wasli backed with cotton textile.

(Confluence-Sangam will be on view at Heidelberger Kunstverein, Germany, till September 18, 2020)