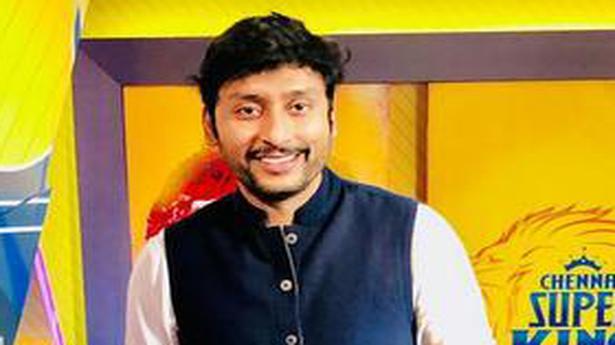 Every half hour or so during the TV telecast of the IPL, a question pops up for the commentators. It is usually requesting an explanation about team combination, strategies or choice of shots.

On Sunday evening, when Chennai triumphed against Punjab, the question that popped up on Star Sports Tamil was nothing to do with cricket. “Balaji anna, are you really going on leave for a couple of weeks?,” posted an anguished viewer.

Cricket at the IPL has been a welcome relief for sports fans after a few months of constant Covid-related updates. But what has kept fans across Tamil Nadu glued to their TV sets every evening is RJ Balaji’s wisecracks and comic punchlines that have made even boring matches watchable.

“The response [to Tamil commentary] has been amazing this year. 2020 has been such a dismal year that we wanted the IPL to cheer up people. And it has,” says Balaji, over phone from Mumbai.

He is referring to the overwhelming response that the Tamil commentary team has been getting. Balaji, in particular, has received a lot of congratulatory messages from people who say that his gags have lifted their spirits in troubled times. “My biggest strength is that I am not pretending to be someone else. I have earned this acceptance because of my stint in media for the past 15 years. Also, the sport has evolved; cricket has become family entertainment and that’s where I come in.”

He believes that his couple of hours on air during the IPL matches adds spice to this entertainment and regales families who have tuned in for cricket. “We get preparatory material before the match so I know the basics. But I leave the cricket talk to the experts and indulge in humour, which is unprepared.” His on-the-spot jokes are widely shared on social media and WhatsApp groups, which spread smiles even as people watched the battle between bat and ball keenly.

This includes his comments whenever a batsman hits a six (“the ball is lost, and it costs ₹ 15,000, and if I had that, I would have paid the electricity bill for the month”) and when there is any peculiar cricketing action on display. He is also popular for his pronunciation of cricketers’ names… Eoin Morgan and Rahul’s names roll off Balaji’s tongue like they have been put inside a mixer grinder. “I reflect everyday life in cricket commentary. I see myself as a reflection of people,” he says.

The RJ-actor has been associated with Star Sports Tamil since its launch in 2017, but this year has been different. “So many people are working behind the scenes to bring you live action. We want everyone to be safe and so get tested for COVID-19 every week. When we landed, we were locked in the room for 14 days and we are in a bio-bubble now. There are several protocols, but that is required to feel safe and keep us going for the next few weeks.”

Balaji’s stint so far has been largely filled with fun and humour, but the one event that left him in shock was the sudden passing away of Australian cricketer-turned-commentator Dean Jones. “Just the night before, he was talking to us about the busy cricket calendar in 2021 and how he would find it difficult to juggle between his commitments. I told him these exact words, ‘You don’t know what is going to happen in the next few days. How can you plan so far ahead?’ The next day, I woke up to the news of his death. It left me devastated.”

The subsequent passing away of singer SP Balasubrahmanyam also marked a sad phase for Balaji, but the show must go on, as they say, and Balaji sported his usual cheerful self on air during a week in which he was feeling dismal. “It was difficult, but TV is a live medium in which we convey our mood to millions of houses watching it. We had to somehow go on with it,” says the actor, whose co-commentators include Krishnamachari Srikanth, Hemang Badani, Abhinav Mukund, Subramaniam Badrinath, Muthu and RK.

Fans of his Tamil commentary will miss him for the next couple of weeks, when he’s on leave. He does not reveal the reason for his absence, but sources say it is to finalise release plans for his upcoming film, ‘Mookkuthi Amman’, starring Nayanthara. So, how’s that coming along? “The film is complete, but even if theatres open, I’m not sure how open families will be to visit cinema halls. My film is a family entertainer, and so we are waiting for the right time to make announcements. For now, there’s cricket for them to enjoy.”