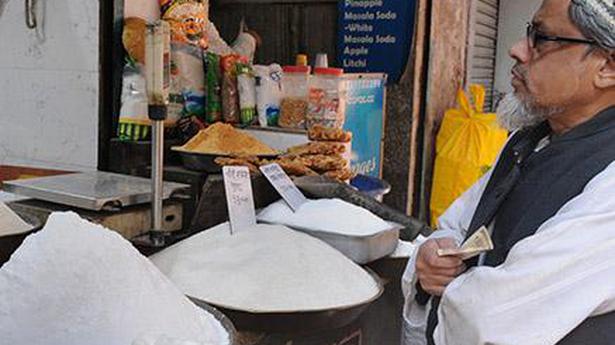 Sugar production in the country during the current sugar season (October 2019 to September 2020) is expected to be 270 lakh tonnes, which will be about 60 lakh tonnes less than the previous season.

In a statement on Tuesday, the Indian Sugar Mills’ Association said mills had so far produced 268.21 lakh tonnes of sugar between October and May. This is 59.32 lakh tonnes lesser than that produced during the same period last sugar season.

The Association earlier estimated the current season production to be 265 lakh tonnes. However, the gur and khandsari manufacturers, mainly in U.P., stopped operations early because of the lockdown and a substantial quantity of sugarcane was diverted to the sugar mills. Hence, mills are expected to produce another 5-6 six lakh tonnes of sugar, taking the total estimate to 270 lakh tonnes. This will still be about 60 lakh tonnes lower compared to the 2018-2019 season.

In sales, while sugar mills in the north have sold the sugar as per the monthly quotas given for May (17 lakh tonnes), those in the west and south have a small quantity of unsold quota. The Centre has extended the sale time for the May quota and fixed 18.5 lakh tonnes as the quota for June.

With relaxations in lockdown, demand for sugar is picking up and is expected to rise this month. “Along with the summer demand, sugar mills may be able to sell the entire June quota, along with the carry forward from May,” the Association said. Total sales in the domestic market this season is likely to be about 25.5 lakh tonnes, or about five lakh tonnes less than last year.

The closing balance at the end of current season, earlier estimated to be about 100 lakh tonnes, may be higher at about 115 lakh tonnes.