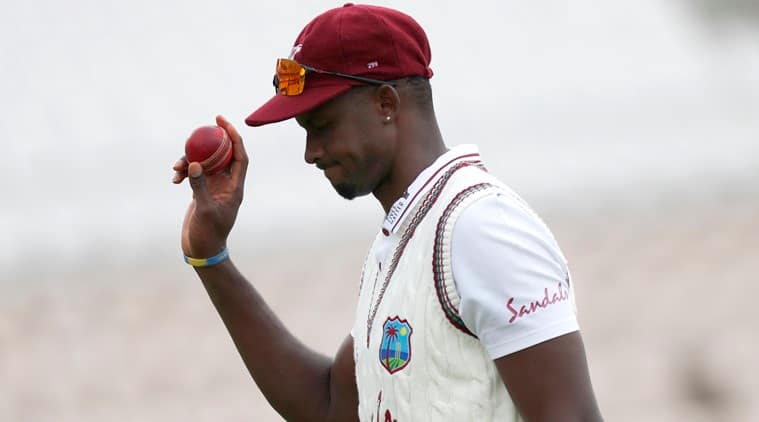 
West Indies’ captain Jason Holder holds up the ball as he leaves the field after taking six wickets during the second day of the first cricket Test match between England and West Indies, at the Ageas Bowl in Southampton. (AP)

Jason Holder since the start of 2018, has played 12 Test matches and picked up 58 wickets at an average of 13.53 and a strike rate of 33. No one has bettered his numbers during this time period, which is simply unbelievable.

At Southampton, it was a day to remember for the West Indian captain, as he picked up a six-fer and thereby recorded his career-best Test figures (6/42). Not only that, but he was also brilliant with reviews as well, overturning all three.

Years ago, when the WICB was a rabble and all of their stars ran off to chase T20 riches, it was 23 year old Jason Holder who stayed loyal to his country.

Holder reaped the benefits of hitting the seam regularly, bowling full and straight in tough conditions for batsmen making life tough for the English batsmen. Courtesy of his brilliant performance Holder now has seven 5-wicket hauls in Test cricket when captaining his side. Only three Captains have more 5-wicket hauls than him: Imran Khan (12), Richie Benaud (9) and Bishan Singh Bedi (8). Further, his 6/42 are the best figures by a captain against England since Imran Khan’s 6/127 at Edgbaston in 1987.  Since 2018, Jason Holder has six five-wicket hauls in Tests, the joint-most by any bowler in this period.

Coming into bowl after Shannon Gabriel’s early strikes, Holder generated enough movement to deceive Zak Crawley (10) as the batsman fell away and missed the ball, clipping his pad with his bat instead. While the umpire said not out, Holder was unconvinced and he took a review as hawk-eye showed the ball hitting leg.

Battle of the allrounders

All eyes were on the battle between the top two allrounders of the game – Jason Holder vs Ben Stokes. Stokes did manage to get the upper hand initially by moving down the track, often giving the charge.

But the big man from Barbados had the last laugh when he once again got the ball to come back with the angle and then nip away at the last moment. Stokes was shuffling across on the flick, was completely done in by the away movement, closed the bat face, found the edge and Dowrich did the rest.

What also helped Holder succeed was that he managed 1.7° of swing, the most of among West Indies quicks, causing havoc in Southampton. Using the angles and his height was one of the primary weapons of Holder.

Buttler, who was his fourth victim, also fell into the trap as Holder came from wide of the crease and then got it to angle back into the right-hander. Buttler, playing for the angle, pushed forward on to find the ball straightening enough to get the outside edge.

This analysis by cricviz also explains further as to why the West Indian dominates in the longer format.

This graphic illustrates why Jason Holder has a bowling average of 14.14 in Test cricket since the start of 2018. Extreme height, extreme swing, extreme seam – all whilst maintaining superb accuracy. #ENGvWI pic.twitter.com/sQASRVAahV

It was in January 2019 that Holder became the No. 1 all-rounder in the ICC’s Test rankings and after a remarkable year of consistency, the astute and galvanising Test cricketer and the captain is safely enthroned as the world No 1.

Previous articleTripura: Rift between allies BJP, IPFT resurfaces over arrest of tribal party worker
Next articleMake your perfume last longer with these tips