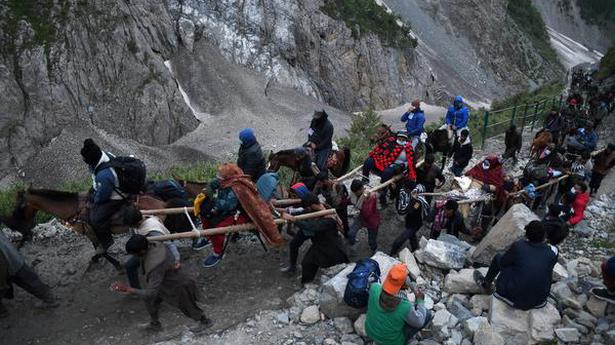 The J&K administration on Sunday performed the rituals to kickstart the annual Amarnath pilgrimage, where only 500 pilgrims will be allowed to trek to the holy shrine from central Kashmir’s Baltal area.

Due to the pandemic, the pilgrimage is likely to be held from July 23 to August 3 only from the Baltal track and not the traditional route of Pahalgam in south Kashmir. Only 500 pilgrims will be allowed per day by road from Jammu, an official said.

Lieutenant Governor Girish Chandra Murmu, accompanied by officials, on Sunday performed the “Pratham Aarti” at the holy Amarnath cave. It was telecast live by Prasar Bharti. Mr. Murmu is also the chairman of the Shri Amarnath Shrine Board (SASB), the body regulating the pilgrimage.

“The pilgrimage will be telecast live by Prasar Barti till the culmination of the yatra on August 3,” an official said.

Nine out of 10 Kashmir districts are designated as red zones.

Under the Disaster Management Act, the J&K administration has laid down the standard operating procedures (SOPs) for the pilgrims and prescribed RT PCR test for all the persons travelling to J&K.

“All entrants into J&K will have to be sampled, tested and quarantined till they are reported to be negative,” an official said.

Entry points to be utilised as quarantine centres

The camping facilities at the entry points will be utilised as quarantine centres.

The J&K administration is stabilising the hill slopes near the Holy Cave, installing railings along critical stretches of the track, constructing additional helipads at lower Holy Cave. Besides, sanitisation tunnels are being constructed at Neelgrath Helipad, Baltal and Domel, the officials said.

An official said high-altitude sickness symptoms are quite similar to COVID-19 and all such cases “will have to be treated as deemed COVID positive in case of an emergency”. “Special arrangements will have to be made for handling dead bodies,” the official said.