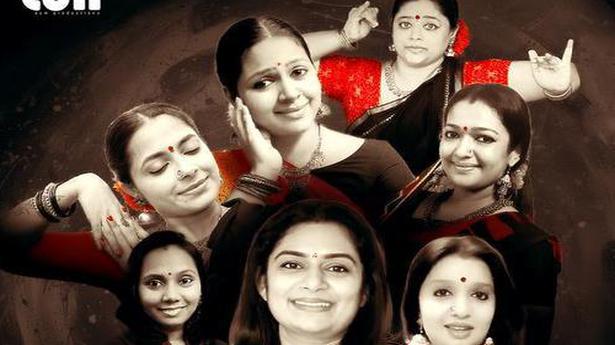 Seven mothers synergised their creative talents to compose, score, sing, choreograph and edit a Malayalam music video of a lullaby, ‘Jwalamukhi’, which is winning them accolades.

Released by actor Mammootty on his Facebook page on June 21, the video and song have won many hearts with its soothing music, melodious rendition and articulate choreography.

Media professional Smitha Nambiar, who composed the poem, admits that she was thrilled by the reception to the song. “I was in Dubai and my four-year-old daughter, Vaidehi, was with my parents in Kerala. Both of us were missing each other. I have never missed a birthday of hers and I had planned to be back in India by May, for her birthday falls on May 27. However, the lockdown came into force and flights were cancelled and I had to be in Dubai till the resumption of flights. She was quite disappointed,” recalls Smitha.

Although both of them used to talk over video calls and Vaidehi used to send her mom voice notes, Smitha longed to be with her daughter. “There was an ambiguity about when the flights would resume and when I would be able to be with her and that was really getting to me. Moreover, when there is work, there is hardly any time to mope for too long. The lockdown aggravated the sense of despondency,” recalls Smitha, who is now in quarantine in Kerala.

One evening, while watching a video of her daughter, Smitha feared she was on the verge of a meltdown. She felt she had to do some venting to overcome her storm of emotions and that is when she put pen to paper to write a lullaby for Vaidehi.

“I got up from bed and wrote down all that was in my heart. When I read the lines, I quite liked what I had written in that spontaneous overflow of powerful emotions. I did not want to change a single word. I sent the lines to my friend Sajna Vinish, an assistant professor of music at Government College for Women, Thiruvanathapuram. I requested her to tune it for me as a lullaby and she agreed to do it without any hesitation,” says Smitha.

Sajna read and re-read the lines and stayed with it for three days before coming up with three different tunes for the lines. Smitha chose her composition in Neelambari raga and they fine-tuned it over WhatsApp and innumerable calls. “Smith and I were in sync with what we wanted to do with the lines and I sent her a rendering with just the shruthi of the tanpura. Smitha decided that she enjoyed that (version) the best and we chose to do away with any kind of orchestration,” explains Sajna, an accomplished singer and musician.

Smitha recalls how the feedback she got for the number was all positive and she was overwhelmed. “Mammootty sir also told me that he enjoyed the music and that the words were sensitive and soaked in emotions,” says Smitha.

That is when she decided to contact an artist friend to make a video with digital drawings. In the meantime, Susmitha Chakkungal from Chennai told Smitha that some day she wanted to dance to the poem. Smitha also felt that it would be better to make a music video with mothers expressing the poem through dance.

She formed a WhatsApp group with Sushmita and Purnima Balasubramaniam from Chennai, Anusri S Nair from Thiruvananthapuram and Seethalakshmi from Kochi. Suggestions and ideas flew back and forth among the women and Smitha decided that they would follow a monochromatic colour palette of black with red highlights.

Each of the dancers choreographed the poems, danced to it, recorded it and sent it to Soumya Sagar, Smitha’s sister-in-law, who did the editing. As Smitha points out, even the recording was an interesting exercise as they had to do almost all on their own.

“Finally, what happened is that all seven of us have daughters and it became an ardent expression of our dreams and wishes for our daughters to go forth and shine and be a beacon of light,” says Sajna.

By a happy chance, the video became a mums’ project and “each of us is thrilled with it,” says Smitha.