‘Kadakh’ movie review: An edgy and fun romp through darkness 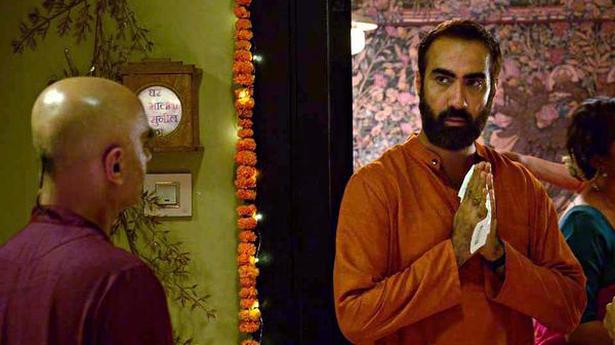 A Diwali party is on in Sunil (Ranvir Shorey)’s home when an aunt (Yamini Das) and uncle (Manoj Pahwa) walk in unannounced with pollution masks on their faces. Given the situation the world is in, at this moment in time, I found myself chuckling away at the eerie and unintended immediacy of it. Though, of course, they are wearing them (incorrectly at times) for other reasons — to keep the “germs” away and for their “highly evolved sense of smell” and a nose that — just like a dog’s — sniffs out the malodorous.

There’s lots that’s fetid in Sunil’s home and in the party. The food served to the guests, for instance, has rotted. A French mindreader Francoise Marie (Kalki Koechlin) can sense something uneasy in her very first visit to Sunil and Malti (Mansi Multani)’s home. Earlier, at the start of the film, we find a stranger Raghav (Chandrachoor Rai) walking into the house just as things are being arranged for the party. It’s Raghav’s entry that throws things uncontrollably upside down.

Even though it’s about a huge set of friends assembled for merriment, there’s a sense of locational containment in Kadakh. However, director Rajat Kapoor maintains a sense of movement, much of it emerging from the nicely gliding camera, the individual energies of the characters and the interactions of the actors playing those roles. There is a fluidity in the interpersonal as we move from the revelry to the skirmishes to the drunken brawls. All the actors are in uniformally great form (a special shoutout for Nupur Asthana as single mom Paro) in their camaraderie, arguments and even while fighting. It’s a cast of actors, at ease and wonderfully in sync in the give and take with each other.

The twists and turns in the tonality of the film are just as much of delicious fun. In the very first interaction itself, between Sunil and Raghav, you find things going from the soft and the courteous to the slightly eerie on to the totally edgy. From a Hitchcockian thriller like Rope to some mad friendly fun to a dark exploration of betrayal and guilt to the downright macabre — Kadakh, is quite like life. The film demonstrates how fortunes can change in a matter of minutes. As does the moral compass of most people. In the game of life, nothing is quite sacrosanct, it all comes in various shades of the amoral.

Kadakh dropped from the line-up of Jio MAMI Mumbai Film Festival in 2018 in the light of #MeToo accusations, is now streaming on Sony Liv