Mangaluru Samachara is the first printed newspaper/periodical/journal in Kannada language. The first issue of this journal was published on July 1, 1843. It was known popularly as Kagada (Kagada in Kannada is paper) This was being published every fortnight, on the first and 15th of every month. Hermann Mogling was the editor of this fortnightly and is known as the father of Kannada journalism.

Mogling who was a Christianity missionary at the Christianity Religion Preaching Camp was known as an a servant of Christ. Coorg, Dharwad and Mangalore were the areas of his fieldwork. Mogling was in India from 1836 to 1860. Though he was offered a well-furnished bungalow by the highest Christrian order, he did not accept it and was staying in a hut. He travelled the entire Karnataka by foot and mingled with common folk. He had renounced life of and lived in tiny villages in a very simple way. He had acquired profound knowledge of Latin, Greek, German, Sanskrit and Kannada languages.

Born on May 29, 1811 at Franch Hyme, Germany, Mogling was awarded a doctoral degree in 1834 at the young age of 23. He worked in the field of Textual Criticism, Journalism, Reformation of Scripts, Folklore, Publication, Christianity and Education in Kannada. He has reformed Kannada script and has published Dasara Padagalu in 1850, and Rajendranaame in 1857 in the reformed script. He has edited and published in 1851, Kannada Bharatha of Kumaravyasa, the magnum opus of Kannada language. All these three books are printed in Litho Press. In addition to the above three books, he has edited and published Chennabasava Purana and Kannada Gadegalu (1847), Jaimini Bharatha (1848), Torave Ramayana (1849), Basava Purana (1851), Coorg Memories (1852), and Tulu Padthangalu. He has translated some portions of Kannada Bharatha and 12 Dasara Keerthanegalu into German Language. Apart from these, he has written many books on Christianity. Besides, he has published a Kannada Almanac (Ephemeris) for the year of Christ 1858, known as Kristashaka 1858, Kannada Panchangavu. 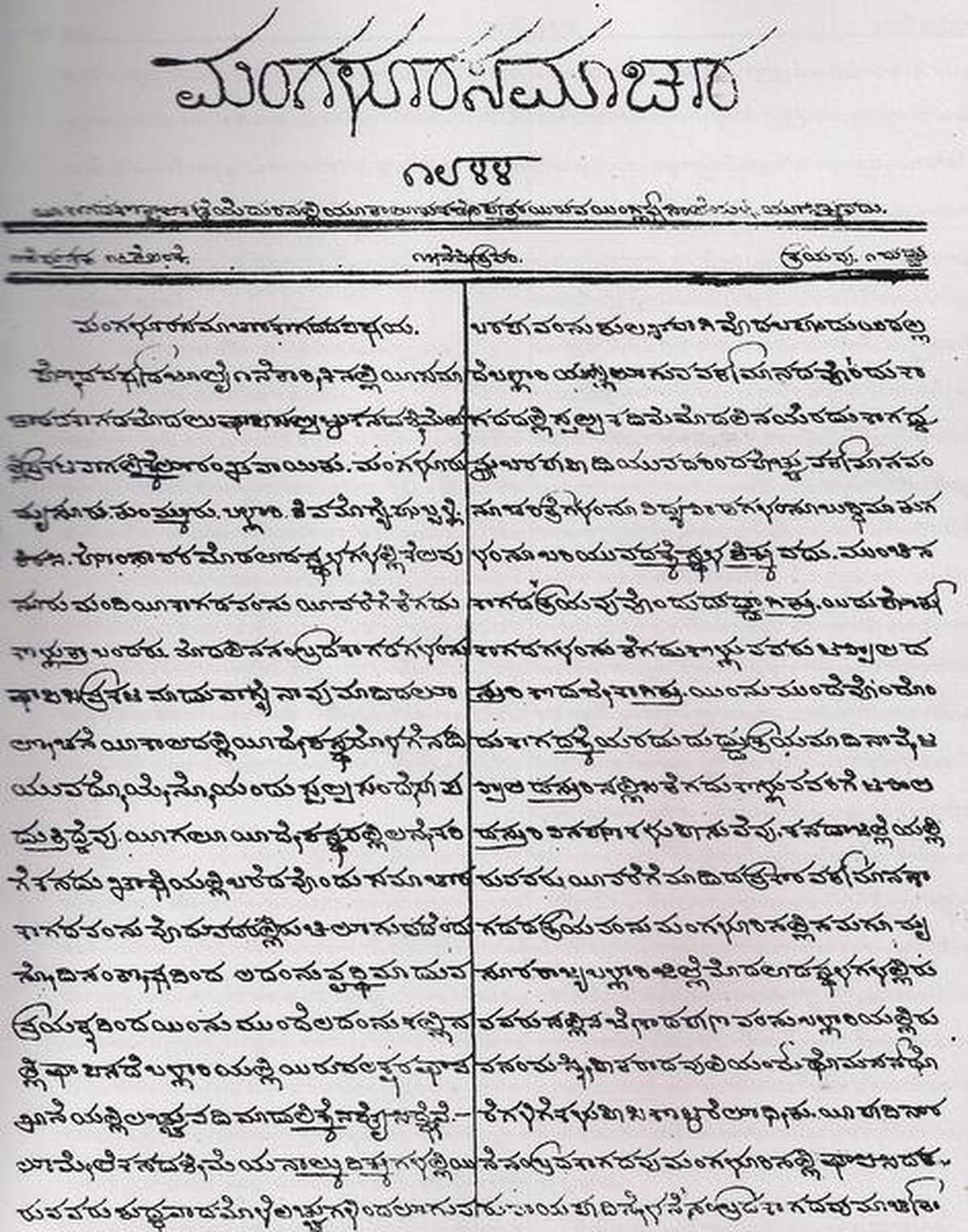 This fortnightly Mangaluru Samachara, which came as a first issue on July 1, 1843 from Mangalore, stopped its publication in 1844 and the 16th and last issue was published on February 15, 1844. All the 16 issues were printed from the Basel Mission Litho Press which belonged to Evangelical Mission, Mangalore. This same journal was published as Kannada Samachara from Bellary commencing from March 1, 1844 till it stopped in January 1845. Mangaluru Samachara was priced one pie, and under its mast head it said: ‘This paper is available for sale in Yajamana Appanna’s house which is opposite to Kotvalara Katte.’ It is also available at the school where Mogling works, near Taluk Office, Mangalore.

Writing about the content of the journal, he says: News of the Town, Government Orders, News of all States, New Surprise/Strange News, Other/others happenings, preachings, Stories, Authentic news sent by readers, Proverbs, and Songs of Purandaradasa. These are the classification of news items being printed in the Journal. Each issue contained a moral story from Panchatantra, and Mogling believed that the Journal should only publish truth, it should cater to the needs of all sections of society without compromising, and the journal should give good but not cheap entertainment. Interesting thing is the Journal improved qualitatively from issue to issue.

“Mangaloreans and native people are interested in hearing and telling stories and news. Since news is mostly distorted, it was decided that genuine news should be collected, and it should be priced low.” 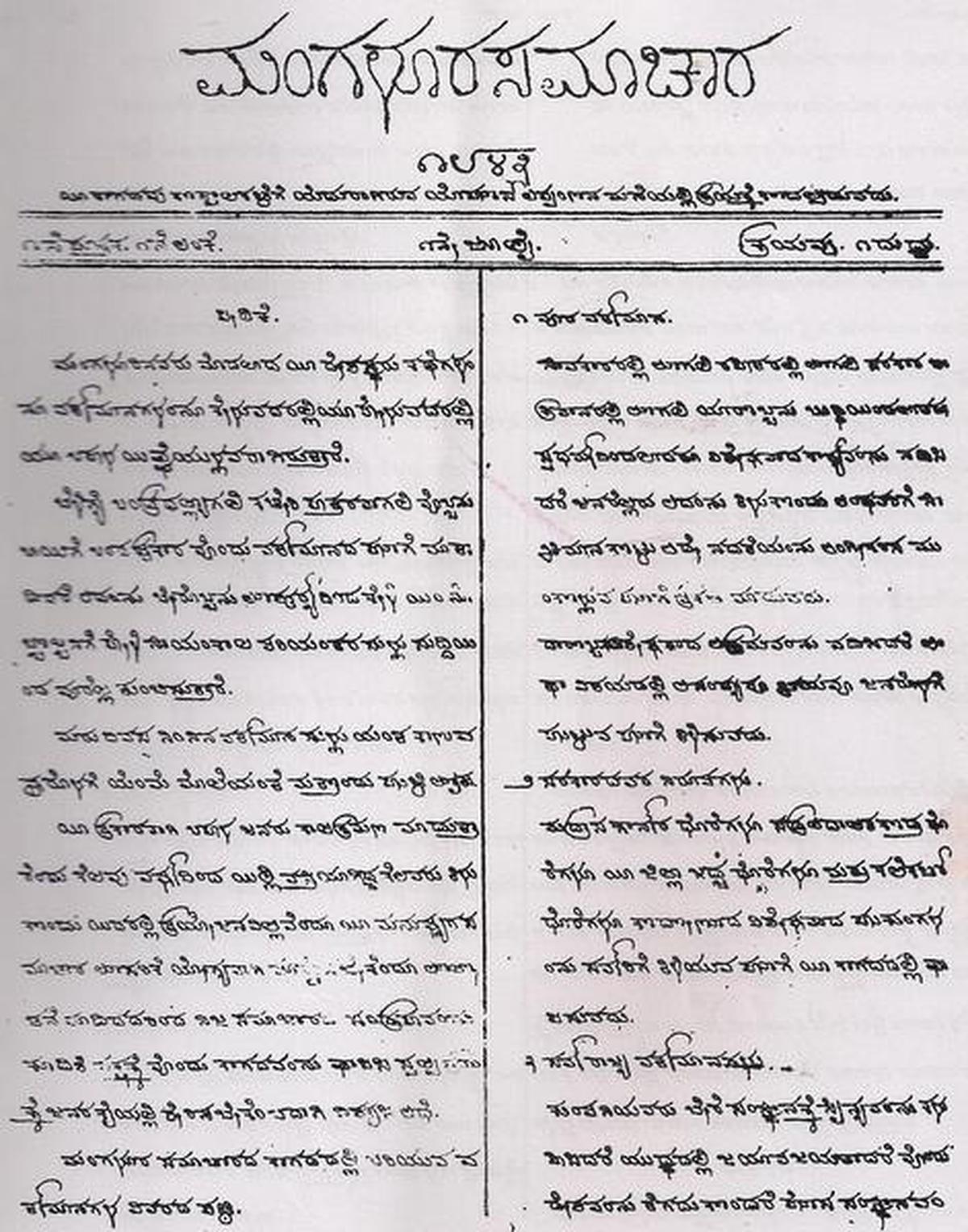 In the last issue of Mangaluru Samachara, Feb 15, 1844, Mogling says that “people from Mangalore, Mysore, Tumkur, Bellary, Shimoga, Hubli, Sirsi and Honnavara subscribed to the journal. Henceforth, it will be printed in Letter Press at Bellary. People from all corners of the Kannada State can read this paper easily and clearly. In addition to this, people will get space to write and send more News, History, Educational Lessons and good sayings.” Next issue itself was Kannada Samachara, which ran till about Jan 1845.

Previous articleLadakh standoff: Unquiet in the Himalayas
Next articleAssam: Two policemen arrested for beating man to death in Nagaon district