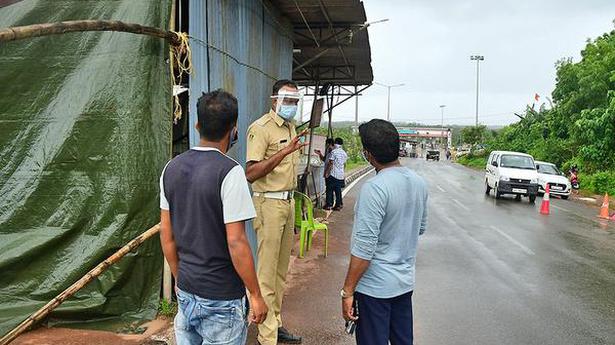 Hundreds of daily commuters between Kasaragod district of Kerala and Dakshina Kannada district in Karnataka were in for a shock on Tuesday following an abrupt decision by the Kerala government to suspend their e-passes for daily commute.

The two districts that share a strong socio-economic and cultural bond had remained cut off during the lockdown period. After Unlock 1, many who worked either in DK or Kasaragod fought with authorities who finally arranged e-passes for daily commute on the condition that those travelling in the morning should return by night.

With Kerala Revenue Minister E. Chandrasekaran on Monday announcing suspension of e-passes with immediate effect and introducing 28-day passes, daily commuters were prevented from crossing the border at Talapady on NH 66 on Tuesday morning. The Minister had held a meeting of senior officials of the district at Kasaragod before announcing the decision, saying that many using the daily pass and returning to Kasaragod had contracted COVID-19.

He said neither people from Kasaragod could move to Dakshina Kannada nor those from Dakshnia Kannada could enter Kasaragod using the e-pass. If required, they may obtain the 28-day pass and stay at their respective locations for the period.

There was commotion at the Kerala check posts at Talapady as people argued with personnel on Tuesday morning. While Dakshina Kannada administration had issued about 1,300 e-passes to Kasaragod residents for their entry into the district, the Kasaragod administration had issued over 1,000 e-passes to residents of Dakshina Kannada for entry into the district.

There were arguments with the personnel at the Kerala check post. Some among them wanted the government to relax the restrictions till July 11. “But we did not budge and told them that these restrictions were in the interest of people’s health. Many left the places after spending time here,” said a Kerala government personnel deputed at the check post.

Among those affected by this restriction included a woman from Talapady who earns her living by rolling beedis. She was stopped by the personnel from taking the rolled beedis to the collection point across the border and collecting her wages. It took nearly an hour for her to convince the personnel of the purpose of her movement.

Previous articleA sorry state of affairs, says HC on patients who died as hospitals denied admission
Next articleUGC to be added as respondent in plea against Maharashtra govt. decision on university exams