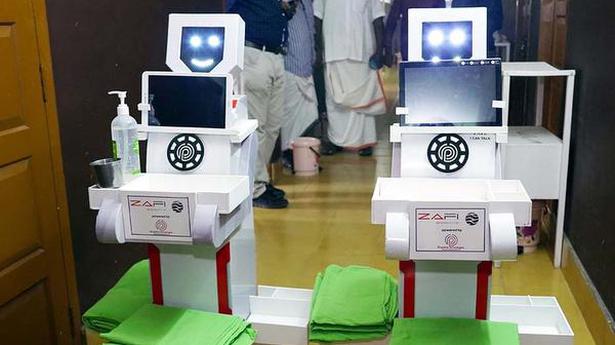 Eraviperoor grama panchayat has once again shown its sagacity in the face of challenges. Two robot nurses named Asha — meaning hope — have been successfully deployed at a COVID-19 First-line Treatment Centre at the Thottackad Medical Centre at Eraviperoor.

Panchayat vice-president N. Rajeev, the brain behind innovative ideas of the local body, told The Hindu that the panchayat wanted to ensure that all possible safety measures were available to the health workers posted at the hospital, especially at a time when Kerala is facing the threat of a community spread.

“An ASHA [Accredited Social Health Activist] worker in the district testing positive for COVID-19 was what prompted the panchayat to explore new ways to ensure adequate protection to health-care workers at the hospital,’’ says Mr. Rajeev.

A Tiruchirappalli-based IT company, Propeller Technologies, worked on technological modification of the two four-ft-tall robots. Sreekanth Parameswaran, medical officer at the centre, says the robots will take medicines, bedsheets, food, etc., weighing up to 8 kg, to each hospital room.

The robots will also facilitate real-time interaction with patients for their family members even from a distance of 15 km, says Mr. Rajeev. Both the robots have been successfully tested, and cost ₹90,000 each.

This is not the first time Eraviperoor is hitting the headlines. The village, located in Thiruvalla taluk, was the first grama panchayat in the country to receive the National Award for Public Administration in April 2015 and the first panchayat in the State to get ISO-9001 certification for its Primary Health Centre in August that year.