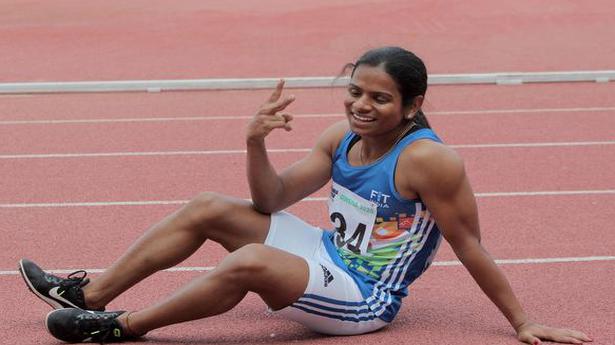 Dutee Chand did the double at the Khelo India University Games (KIUG) in Bhubaneswar on Sunday as she clocked 23.66 seconds to run to the gold in the 200m event.

The victory marked Dutee’s second gold in as many days, as she set a new National University record on her way to the 100m title on Saturday.

“In the 100m, you don’t have time to decide when to speed up or slow down, but in the 200m you have more time to realise when to go fast and when to relax the body,” Dutee said after the race, talking about the difference in the two events.

She added: “You need to put in a lot more effort in the 200m. Runners like me, who focus more on the sprint, find it difficult on the turn in the 200m event.

“I struggled a little bit today, but I pulled through in the end to clock a competitive timing.”

Dutee’s best in the 200m came in the 2018 Asian Games in Jakarta where she ran 23s in the semifinal and went on to win the silver in the final.

The qualification mark for the 2020 Tokyo Olympics has been set at 22.80, only 0.02 shy of her best, but she has a pragmatic approach. She knows her strength and has chosen to focus only on 100m.

“The Olympic mark is 22.80 and it will be difficult for me to achieve it.

“Since I’m short, I find it difficult to pick up speed and it becomes tight in the end. It’s not that it is impossible, but it will need more time.

“ It will be tough for me to focus on two events and hence I’m focusing on only 100m,” she said.