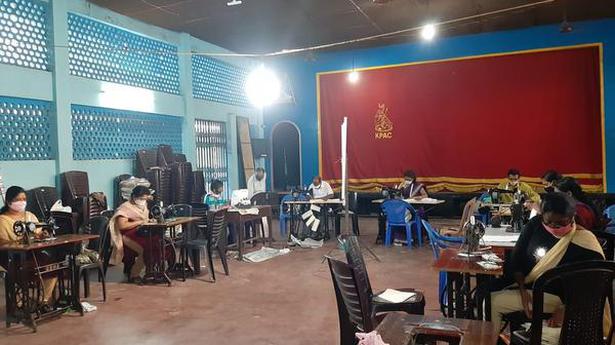 But, with COVID-19 bringing the curtain down on stage performances, albeit temporarily, artists and staff of the drama company have turned to mask-making to eke out a living.

Until March, the KPAC auditorium at Kayamkulam used to witness intense drama practice by 45 artists of two troupes under the KPAC. However, the hum of sewing machines now fills the air at the auditorium with some of the artists and staff taking up tailoring, thus in a sense joining the fight against the pandemic.

A. Shahjahan, secretary, KPAC says that they have turned to mask-making for sustenance. “Back-to-back floods in 2018 and 2019 dealt a major blow to the professional theatre sector in the State as drama groups lost several venues. The COVID-19 has deepened the crisis and pushed artists and troupes into dire straits. As the majority of the plays are performed between December and May in line with the festival season, we lost a good number of venues this year. The profit from the sale of masks will be distributed to the artists, staff and former artists in need of financial assistance before Onam,” Mr. Shahjahan says.

Of the artists and staff of the KPAC, 12 living in and around Kayamkulam are engaged in mask-making. They have produced around 12,000 masks of different types in the first two weeks. Rates of masks range from ₹7 to ₹25.

“We are not doing it as a business enterprise. We have a policy not to sell masks to shops and middlemen. They are sold directly to consumers below market rates. We have received a lot of orders, including 50,000 from a local body. Apart from different types of masks being produced, we are also planning to stitch designer masks for children,” Mr. Shahjahan adds.