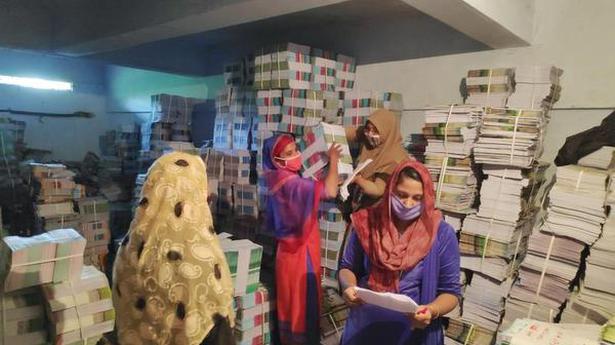 Kudumbashree is on mission mode to expedite the distribution of textbooks for classes I to X.

This year, the distribution has been entrusted to Kudumbashree. Its Chief Executive Officer Harikishore S. says they have entered into an agreement with the Kerala Books and Publications Society (KBPS) for the distribution.

With online classes under way for the past one month, Kudumbashree is going the extra mile to distribute the textbooks. Nishad C.C., Kudumbashree State programme manager, says they have made good progress since May 15 when the distribution began.

Over in three districts

Textbook distribution to government and aided schools has been completed in Thiruvananthapuram, Idukki, and Alappuzha districts. It is 97% complete in Malappuram and Wayanad districts. In the remaining districts, the textbooks will reach societies within 10 days. Distribution of textbooks for unaided schools in Alappuzha will begin on Thursday.

Mr. Nishad says though the textbooks were printed in January, the lockdown announcement derailed their distribution.

The original April 15 deadline for distributing the first volume of textbooks could not be met as the textbook hubs were closed on account of the COVID-19 safety protocols.

With easing of restrictions, the distribution resumed mid-May. Nearly 300 people – 217 Kudumbashree women and the rest menfolk from the families of Kudumbashree members – are working extra hours to speed up the process in the wake of the launch of online classes, says Mr. Nishad.

The Kudumbashree members earn ₹750 for a day’s work, and ₹100 for each additional hour. The wages are transferred by the KBPS to the respective district mission of the Kudumbashree and in turn to the bank accounts of the women.

Some delays in distribution do occur such as when an area is declared a COVID-19 hotspot, but they make up for it quickly as in Wayanad, points out Mr. Nishad.