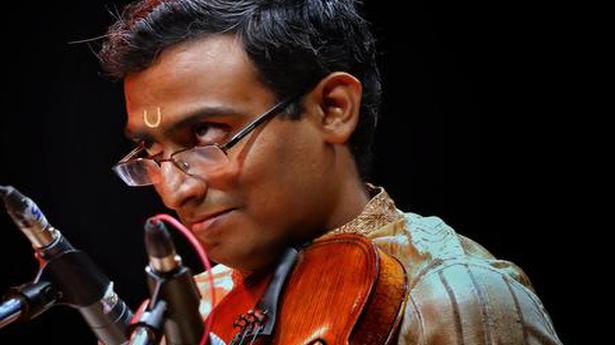 Embellishing and enhancing the performance of other artistes requires constantly calibrating oneself with the other musicians on stage, and putting a lid, as needed, on one’s own creative urges. Especially so for accompanying violinists.

L. Ramakrishnan, a prolific performer, has understood this role impeccably and rises to the occasion. He observes his fellow artistes closely, anticipates and follows carefully and knows how much, and where exactly, to play.

Senior vocalist S. Sowmya says: “His knowledge of vocal music, his quest for learning and asking questions, are creditable. He plays in strict proportion. One has to practically beg him to play more.” Ramakrishnan Murthy adds: “He is the ideal partner to have on stage — he will bring out the salient points of what has been sung and spur you on as well.” He also avoids the common tendency of replaying what the co-artiste rendered but a few notes behind — though uncomfortably dissonant, it is so common that rasikas are desensitised.

Mentored by Dr. Sulochana Rajendran at Shanmukhananda Vidyalaya in Bombay, Ramakrishnan learned violin there from Visalam Vageeshwar. He completed the seven-year course getting the Shanmukha Mani title in 2001. In 1996, he began learning from A. Kanyakumari.

On the combination of institutionalised learning and individual lessons, he says, “Listening to several other students play in a formal classroom situation is invaluable. We imperceptibly pick up much of what to avoid or imbibe right there. But just as one cannot be good in a language with correct grammar alone, Kanyakumari teacher made me realise much more, teaching me how to bring in ‘sahitya suddham’ in playing, to stress syllables and which ones to, to play gamakams in proportion, how to accompany and where playing might actually hinder the overall experience of the concert.”

After graduating with a degree in Electronics and Communication, Ramakrishnan moved to Chennai on work. He was performing regularly and began learning from T.K. Govinda Rao too. Besides in-depth knowledge of ragas and kritis, Govinda Rao also taught Ramakrishnan to never let his guard down. Accompanying Govinda Rao at a concert, Ramakrishnan mentally relaxed after the main piece ‘Thiruvadi Charanam’ (Khambodi) and the tani avartanam concluded. Govinda Rao threw a googly, though. He sang ‘Adhaya Sri Raghuvara’ in Ahiri….with kalpanaswarams! “I knew Ahiri. But never thought of swarams in that raga!” He was called out on stage. It is difficult to digest public criticism but the then-22-year-old Ramakrishnan took it constructively. “It was an excellent lesson for me. I learned to be prepared for anything, literally.” The sense of positivity and possibility is an integral part of Ramakrishnan’s mental make-up.

“I know Ramakrishnan since 2008 when he used to come home to practice — we would play one ragam for hours together. He has the amazing ability of explaining the most intricate nuances in a simplified manner,” says Abhishek Raghuram.

From 2009-2015, Ramakrishnan was in Connecticut on work “to defray my house payments as quickly as possible.” Soon after his wedding in 2011, the couple met B. Balasubramaniyan of Wesleyan University, student of T. Viswanathan. Ramakrishnan learned a lot of the intricacies and compositions of the Dhanammal bani from Balasubramaniyan. Upon returning to Chennai, Ramakrishnan quickly got back into the performing circuit.

He suggests accompanying violinists learn as many kritis as possible and listen to different patantarams without judgment. Otherwise, one has to be completely concentrated on looking at the artiste’s face and lips to just figure the piece out. Ramakrishnan Murthy says his own understanding of ragas has been enhanced by Ramakrishnan’s nuanced knowledge gleaned from his vast repository of compositions. “This was evident at the lecture demonstrations he recently did,” he adds.

Not a surprise, therefore that Ramakrishnan is much sought after. He stresses the importance of maintaining a cool head in performances. “Mistakes will happen. We should acknowledge it and move on immediately. A sense of humour is essential. By proving ourselves again and again through perseverance, we can establish our credentials,” says Ramakrishnan.