Home States Tripura Lockdown: No buyers for Cashew in Tripura, farmers plan to shift to...
StatesTripura

Lockdown: No buyers for Cashew in Tripura, farmers plan to shift to rubber cultivation 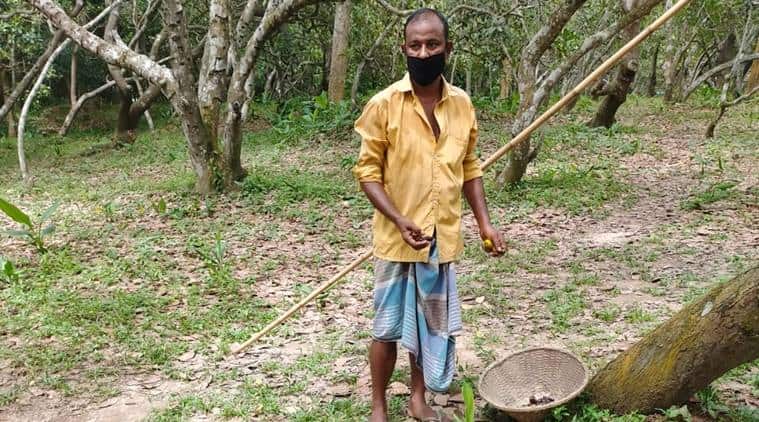 COVID-19 induced lockdown has badly hit cashew growers of Tripura as there are no buyers. Most of the nuts are rotting away in fields even as the harvest season is on. Tripura has nearly 5,000 registered cashew nut growers, out of which 3,000 are from Rajnagar alone. They usually sell raw cahew to wholesale dealers, who privately process it.

The farmers, now, want the state government to purchase the cashew from them at minimum support price (MSP).

“This is the perfect time for harvest but we haven’t gone to the farm to pluck the cashews as we have no order. Much of the cashew is simply rotting in the fields,” said Manik Das, who is a cashew grower from Rajnagar village of South Tripura district, adding that most of the farmers in the area didn’t bother with investing further money in the harvesting process.

Pranab Das, another cashew grower of the village, said raw cashew nut prices have been on free fall this year due to lockdown. Bhajan Das, Kalan Miah and other cashewnut growers of the area voiced a similar concern.

“We haven’t got any dealer from Kolkata this year yet. We sold cashew at Rs. 120 per kilo wholesale rate. Our product quality is good. But with COVID-19 pandemic and lockdown, no one turned up this year. Some local businessmen are trying to purchase our products at a cheap price. We are contemplating to completely shift to rubber plantation,” said Kalan Miah, who owns 4.6 acre of cashew farm.

Rajnagar, Satchand, Rupaichari Rural Development Blocks and few adjoining localities are known for cashewnut cultivation. Most of these areas have low-sloped undulating hill which don’t favour paddy cultivation or other major cash crops.

A majority of villagers here have cashew nut cultivation as main source of livelihood, though a large section of them shifted to rubber in the last few years due to dwindling prices and high investment. 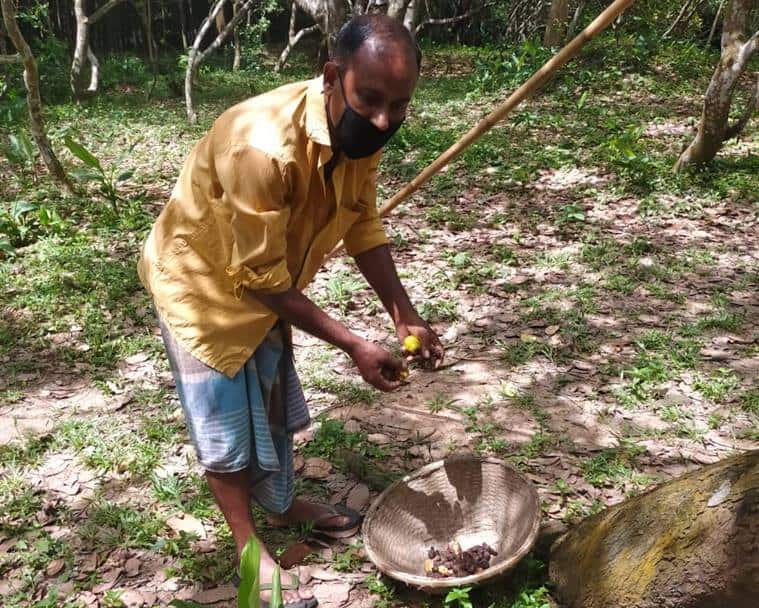 Most of the farmers in the area didn’t bother with investing further money in the harvesting process, said Manik Das. (Express Photo by Manik Das )

Rajnagar Block Development Officer Swarup Kumar Paul said most of them cashew nut growers manage their crops on their own without government benefits.

“The local administration help them to collect raw cashew nut from some of their lands lying outside barbed wire border fence with Bangladesh, coordinating with the BSF. While we have sent proposals to concerned authorities to set up cashew nut processing units here, it is not entirely true that raw cashew nuts aren’t sold. They sell, but fetch a low price to the growers,” the official said.

Local MLA and Communist leader Sudhan Das said cashew nut production was encouraged during the erstwhile Left Front government. However, he claimed the nut has been fetching lower rates compared to last two crop seasons, which might have propelled many farmers to shift from cashew nut to rubber cultivation.

“They (growers) sold cashew nuts to traders at Rs. 125 per Kilo in 2017. In 2018, the rate came down to Rs 60. Many of them are forced to sell their produce at Rs 35 per Kilo this year. The Left government used to fix a minimum rate to ensure the farmers didn’t face loss. But since the incumbent government didn’t take any steps in this regard in last two years, farmers face huge loss”, the legislator told indianexpress.com.

He also said he has written to Tripura Agriculture Minister seeking his intervention to ensure a minimum price for traders to procure from the cashewnut growers.

The West Tripura Lok Sabha MP Pratima Bhowmik agreed to the need of setting up a cashew nut processing factory.

“The BJP-led government was formed here only two years back. I am aware of the problems related to the issue and I feel there is a need to set up a processing unit in the area. Let’s see what can be done”, she said.

However, according to agriculture and horticulture experts, cashew nuts have a much higher shelf life compared to vegetables and fruits like pineapples, which allows the nut to be stored in domestic environments.

“There is some problem regarding sale of cashew nuts. It’s natural because lockdown has affected all trade. It’s the same everywhere worldwide. Cashew nuts have a higher shelf life than most other easily perishable products like fruits and vegetables. The growers can simply sun-dry the nut and store them at their homes for now. After the condition improves, they can hopefully sell them”, an horticulture expert, who didn’t wish to be named, informed.

Tripura’s incumbent BJP-IPFT government laid heavy stress on boosting agriculture, horticulture, fishery and dairy industries since they assumed office in March, 2018. Earlier this year, Chief Minister Biplab Kumar Deb asked people engaged with primary sector activities like these to boost their production and aid in reviving the economic damages incurred due to lockdown.