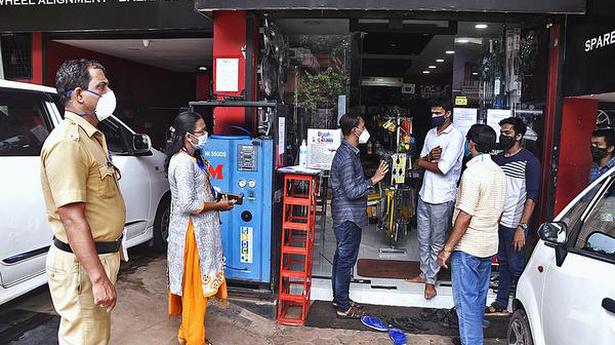 Thirty-five more persons tested positive for SARS-CoV-2 in Malappuram district on Monday, raising the total number of cases under treatment to 308. While three of the new cases were through local contact, the others are returnees from abroad and other States.

Eleven returned from other States and 21 from abroad. All were admitted to Government Medical College Hospital, Manjeri, said District Collector K. Gopalakrishnan.

He advised those who had come into contact with the infected persons to go into home quarantine. They should also alert Health officials. As many as 37,742 persons are in quarantine in the district.

Fourteen persons tested positive for SARS-CoV-2 in Thrissur district on Monday. Of them, 12 arrived from abroad, while two came from other States. There was no infection through contact on Monday. As many as 16 persons recovered from the disease. In all, 188 persons are undergoing treatment at various hospitals in the district. As many as 17,393 people are under observation.

Meanwhile, nine BSF jawans, who were in contact with jawans who were tested positive, were shifted to a quarantine centre at Guruvayur.

With 11 more persons testing positive for SARS-CoV-2 in the district on Monday, 12 more wards were classified as containment zones.

Among those tested positive, five returned from abroad and six from other States. Meanwhile, 11 persons were discharged.

With this, the number of infected patients in the district rose to 596. Of them, 339 were discharged. As many as 24,273 persons are under observation in the district. Among them, 59 are at Government Medical College Hospital, Kannur, 25 at the Kannur District Hospital, 294 at the Anjarakandy COVID Treatment Centre, 36 at the Thalassery General Hospital, 22 at the Kannur Army Hospital, three at the COVID First-Line Treatment Centre, and 23,834 in the home quarantine.

So far, 16,461 samples have been sent for testing. Of these, 14,928 returned negative. The test results of 512 samples are yet to be obtained. There are 12 containment zones in the district.

Eight persons tested positive for SARS-CoV-2 in Palakkad district on Monday. They included a three-year-old boy from Thiruvegappura. Health officials said 33 persons were cured of the disease on Monday.

Seven of the new cases were imported ones, while one was the result of local contact. Two of them each had returned from Maharashtra and the UAE, and one each from Tamil Nadu, Saudi Arabia, and Qatar.

A 65-year-old woman from Kumbidi apparently contracted the virus from a doctor at Edappal. She is under treatment in Malappuram.

Minister for Welfare of SC, ST and OBC A.K. Balan said here on Monday that the Centre’s decision to stop pass regulations for entering States would lead to an uncontrolled increase in COVID-19 cases. It will be tough to detect infections among those who come to the State as the Centre had waived the pass regulation at the border, he said. Addressing a meeting of MLAs and people’s representatives in the district, the Minister said ward and panchayat councils should exercise more caution in the wake of the stoppage of border pass regulations.

The number of COVID-19 cases continued to rise in Wayanad district as eight more persons tested positive on Monday.

All of them had returned either from abroad or from other States. Two of the cases were returnees from Saudi Arabia, five from Karnataka, and one from Telangana. The patients were shifted to District hospital, Mananthavady. Of the 115 cases reported in the district so far, 71 have been cured.

Six more persons tested positive for SARS-CoV-2 on Monday. While four of the affected persons came from abroad, two others came from other States.

As many as 7,193 persons are under observation in the district. They include 6,871 in home quarantine and 322 in institutional observation.