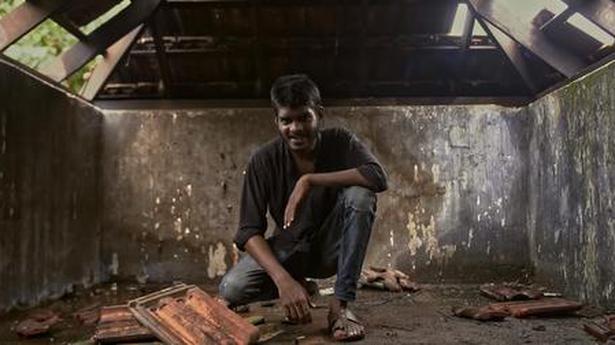 A Malayalam rap video has crossed more than 3 lakh views since it was released on YouTube on June 13, a staggering number for a debutant. ‘Voice of Voiceless’ is a fearless, straight-from-the heart act by rapper Vedan.

His lyrics are intensely personal, he says. “My art is my politics. It is the politics of caste, class and colour.” Vedan, his stage name, is his childhood moniker, something that has stuck with him. “It means hunter. I sing of the hunted and the hunter and I felt this name suited me,” he says.

As he raps about the landless and the voiceless, his words sharp as a scalpel, Vedan wants the world to sit up and take note. “A spark is all that is needed…,” he says. “My music is a deep reflection of where I come from,” he says, over the phone from Thrissur.

Vedan dropped out of mainstream education after Plus Two and did odd jobs, as he needed to keep his family afloat. Born and raised in a colony behind the Thrissur Railway Station, where life was far from “perfect”. Vedan’s art is drawn from this setting, from a place, which “everyone has forgotten”. “This place, where I lived, has only about 10-15 families. There are children here. Even basic facilities don’t reach them. It is like they don’t exist… like they don’t matter.”

The 25-year old rapper was introduced to the art from only much later, when he was working as a studio boy in Thiruvananthapuram. He found himself in a creative environment, which stirred his own need for self-expression through words. He discovered American rap sensation Tupac Shakur, “who spoke about reality the way it should be – without mincing words.”

Though the song was born from a moment of inspiration, the album, as an idea, took time to materialise. Funds were a problem. With the help of friends and partly through crowd funding, the video was produced and released to a response he didn’t expect. While the music was composed by Akhil Ramachandran, the video was shot by Hrithwik Sasikumar. “The things I speak of have been relevant at all times. Discrimination has always been happening. My protest is not something new…it isn’t a fad,” he says. The video was shot in his colony and the faces that feature in the video are of the children who live there.

Vedan credits his lyrical dexterity to his reading, a habit he picked up along his journey. “I don’t come from a background where people read. But I learnt it was important and I started reading with a voracious intensity. I am what I am because of my reading,” he says.

He raps in Tamil too, a language that has always charmed him. “Tamil is one of the most beautiful languages I have heard. I am in love with it. It has an innate rhythm.” Though he scribbles lines in Tamil, a full blown album is yet to take shape. Vedan is interested in folk dialects in Malayalam. He says he wants to learn the language in its pure form.

Vedan dabbles in art, works as a daily wage labourer, writes and travels. Films have been a long-time passion and he would be rapping for two Malayalam films, one of them being Anil Radhakrishna Menon’s.

Someday, he hopes to do his own film. “I will continue to make my art my way,” he says.