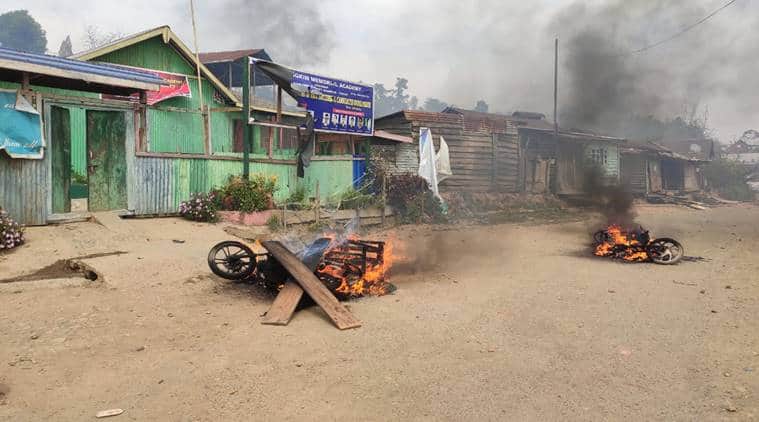 
Vehicles were set ablaze in Kamjong.

Mobile internet services were suspended for three days in Manipur on Monday evening after tension erupted in Kamjong district. According to official sources, several houses and vehicles were burnt down by miscreants after a confrontation between two groups in and around Chassad area of the district.

The district authority also imposed prohibitory orders under section 144 until further notice in and around Chassad and Kamjong and along the main road of Sampui areas. However, what triggered the confrontation is yet to be confirmed.

Manipur Chief Minister N Biren Singh has said that a committee of officers has been constituted to inquire into the events leading to the violence, besides identifying the people responsible for it. The three-member committee is headed by Additional chief secretary of Manipur Dr. Suhel Akhtar. It will submit the report within 10 days.

The Chief Minister said that the situation has been brought under control and additional police forces led by an additional director general of Police (ADGP), L. Kailun, is stationed at Kamjong.

He said that a team of ministers and MLAs rushed to the areas after receiving the reports of the “unfortunate” incident.

“Our ministers, MLAs assessed the situation at ground zero. The team also met all the villagers of both sides,” the Chief Minister added.

Biren Singh said all the victims of Chassad village, whose houses were destroyed in the arson, were safe and have currently been given refuge at an Assam Rifles post. A medical team from Imphal will leave for Kamjong on Tuesday, he said.

Singh said all possible help will be extended, particularly those displaced by the violence. “We have asked the district authority to submit a detailed report on the damage inflicted during the violence, so that we can rehabilitate the displaced villagers who houses were destroyed,” added Singh.

Clarifying on the suspension of mobile internet, Singh said it was a precautionary measure so as to avoid any untoward incident, citing videos and images of the arson on social media.

“We have no intention of banning the internet and harassing the public. But prevention is better than cure,” he said.
Singh appealed to the people to refrain from giving a communal tone to the incident.

“The attacks are carried out by miscreants and it was not a community-based incident. The culprit will be dealt with as per law,” said Singh.

Previous articleSoaps made from goat milk? This Chennai store is the place to buy it
Next articleManipur: Mobile internet services restored as normalcy returns in Kamjong district