Marginality in a churning milieu 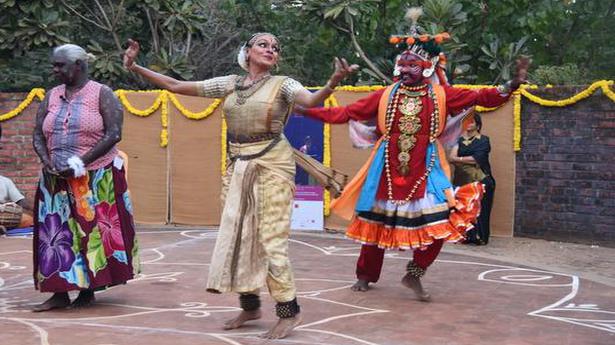 In our previous articles we explored marginality in relation to patriarchy in the work of the acclaimed devadasi Muddupalani from the 18th century and how it impacts our performance, “Radhika and Muddupalani.” We also looked at violence against women stemming from sexual repression in Indian society due to the collusion of various forms of patriarchy in our intercultural project, “Sthree.” In this piece, we continue to explore questions of marginality from our perspectives as we worked collaboratively in our inter-cultural work — ‘Churning Waters.’

In 2018, the Indian-Australian Indigenous project called ‘Churning Waters’ was selected for Australia Festival in India and premiered in 2019 January-February at Adishakti in Puducherry, Mettumulluvadi village near Kanchipuram and at DakshinaChitra in Chennai. Together with Uthra Vijay (Carnatic vocalist-composer from Melbourne), we joined Indigenous Australian women Gina Maree Bundle, Nadine Lee and Sylvia Nulpintidj (Yuin, Larrakia and Yolgnu) from Victoria and Northern Territory. We worked with them between Darwin and Melbourne, both online and in person. Koothu artiste Thilagavati Palani and her team, including Green Kumar and Loganathan, joined us when we all arrived at Adishakti.

What we developed was a multi art form work that required audiences to move along with the installation, stories, music, and dance being performed. The work was site specific and designed differently in each location, catering to different kinds of audiences. At Adishakti, the work aligned itself to the politics of the space of contemporary experimental performance, critically engaging a unique mix of local and international audiences. In Mettumulluvadi, which was the home of Thilagavati, at the centre of the village under a temporary makeshift canopy, we performed for over 1000 people (including children) to become part of an all-night koothu. At DakshinaChitra, it was adapted to cater to the much larger configuration of the site with its eclectic markets, folk arts and featured visuals and brought a Chennai audience unsure of what they would encounter.

‘Churning Waters’ was the culmination of three years of discussion and collaborative exchange including other Indigenous-Indian work (such as Serpent Dreaming Women) that had preceded it in Melbourne and Darwin. In the process of creating the work, we brought together ancient myths and stories about land, water and sky with contemporary stories of climate change from a feminist perspective. The work intertwined Tamil, Yuin, Larrakia, Yolgnu and English languages, songs, dances and stories mixing elements from different caste, class, national and race backgrounds that each of us came from. Stories of Bunjil/Nyankara, the eagle, intertwined with Garuda, Matsya Purana combined with whale dreaming, terrible stories of fracking in far north Australia was juxtaposed with the pollution of the Yamuna river in India. What was reflected was a melange of bodies, thinking, dreaming together about how we bring past stories, some that go back 15,000 years, 3,000 years and others more recent to reflect our different and varied backgrounds. The work was the culmination of very different processes for each of us.

Priya: I left India when I was quite young and arriving in Melbourne I found myself in a sea of whiteness with blond hair and blue eyes surrounding me all the time. Coming from the majority in India, it was very strange to become a minority and see myself as a coloured body. It was only when I saw images of Indigenous Australians with dark bodies and dark curly hair like mine and understood their deep and long history in the land that I began imagining a place for myself in Melbourne. I also found a refuge through my dance training in Bharatanatyam, which became my deepest connection to India and entwined with my identity. My dance form was and continues to be marginal within an Australian mainstream context. My relationship to both power and marginality is very complex and constantly shifting. As a person of Indian origin, it is by being marginal in contexts outside of India, that I began to understand what it means to have privilege within an Indian context. To quote the post-colonial theorist Gayatri Chakravorty Spivak, “How can we unlearn our privilege as our loss?” becomes the question for us as artists when we are in positions of privilege.

I realised however that my marginalisation is quite different to Indigenous marginalities. Despite seeming commonalities we had great differences. I was a migrant on their land that had been stolen from them. They were still colonised whereas I had come from a country where although our colonisers had departed we still faced deep inequities in society due to caste and class differences. Indigenous Australians are some of the most marginalised communities but despite having faced colonialism, genocide and decimation have still survived and continue to adapt and grow. When I asked myself what was my responsibility as a settler on their land, the possible pathway that opened was how to create a dialogue through performances that highlighted the structural inequalities while finding deep connections. Years later, working together to create ‘Churning Waters,’ the significance of it was multiple for me. Primarily because Bharatanatyam, Carnatic music and Indigenous art practices all remain marginal within the Australian context albeit in very different relationships to power. Without access to mainstream spaces and stages and funding that is reserved for Western contemporary or classical forms, we struggle to be seen and supported.

Priyadarsini: The strength of my training with my guru Kalanidhi Narayanan focused on the analysis of texts and the situations portrayed in them, as well as the characters and layered meanings containing within. When we started working on ‘Churning Waters,’ this approach to understanding texts opened new perspectives. When I listened to serpent and whale dreaming stories from indigenous perspectives in the course of our collaboration, it took me a while to understand their way of storytelling as it was very different to ours. The Indian ways of storytelling I know moves laterally and vertically and there is a beginning, middle and end. On the other hand, I found their stories very open ended, almost like puzzles that we have to solve ourselves. This was very striking. I learned not to interpret from what I know and experienced but I had to get into the spirit of how they think. This was true of the collaboration in ‘Churning Waters’ and other ongoing collaborations which heightened awareness of climate change and pollution. Through research and performance exchange we were able to find cultural differences and similarities including the idea that Indigenous Australians and Indians had been exchanging ideas for thousands of years evident in DNA, animals, coins, dances, songs and Dravidian languages present in Indigenous cultures.

We can see the world order is rapidly changing and the veil of illusion and control has slipped. Truly, we don’t know what tomorrow brings. We also don’t know what kinds of lives we will lead if and when this crisis is over. What we do know is that this is a moment of great change and possibility and we cannot slip back into the miasma of what we were doing before. The arts and dance are under peril more than ever. Especially in the Indian context in the field of Bharatanatyam, there is currently heated discussion raging about privilege, appropriation and marginality — how do we move from here with a sense of history? Despite our many differences how can we work towards an important common cause?

Priyadarsini Govind is a national and international award winning Bharatanatyam dancer and artiste based in Chennai.

Dr. Priya Srinivasan is a dancer, curator and author of the book, Sweating Saris: Indian Dance as Transnational Labour’ based in Melbourne, Australia.