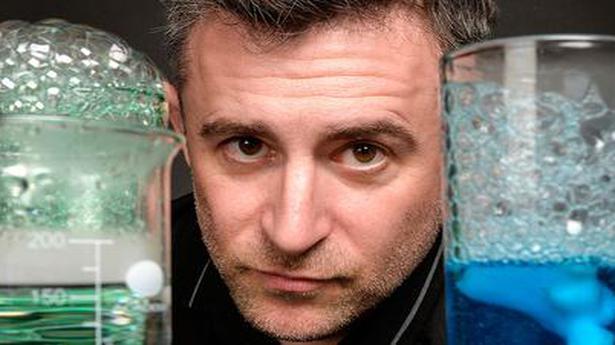 Out of a see-through bowl filled with viscous vegetable oil (and mind you, nothing else, as far as my eyes go), UK-based astronomer, broadcaster and educator, Mark Thompson, whips out a transparent test tube: is it magic? No, he says. He has said this multiple times and wouldn’t mind repeating, considering it is the catchphrase of his show. “It’s not magic, it’s Science.” Through this simple experiment, he is explaining how the material properties of an object change, based on the medium it is in.

Mark Thompson’s Spectacular Science Show is a physical show comprising unassuming yet fascinating (read: visually appealing) science experiments for children above the age of four. As is the case with everything else, this show is also taking to the online medium — and this time, it is available for a global audience in the form of a live stream. Blank Slate in collaboration with Cahoots Theatre Company is bringing the ticketed show to children everywhere, in a bid to make learning science concepts experiential and fun.

Mark, who took to astronomy from a young age is known for his public astronomy lectures for kids and adults alike. He has presented TV shows on BBC and has written nine books on astronomy till date. “My passion for the night sky started when my father took me to my local astronomy club when I was 10 years old. I saw Saturn through a telescope and it got me super excited about space,” Mark says.

But the science show is a deviation. It was devised in an attempt to engage families. He says, “I saw The Bubble Man (Louis Pearl) at the Edinburgh Fringe Festival who has a show blowing different bubbles for an hour. The kids loved it and it was then that I thought about a show with an hour of science demonstrations.” Performed for the first time nearly four years ago, the show has since garnered attention around theatres in the UK.

Speaking of the show that will be available to stream, he cites a few examples: “In this particular show, I explain what a chemical reaction is, by producing columns of foam using steam jets, I talk about how rockets work and show this using tiny little film canisters and explain what is needed to make a fire, using hydrogen explosions and fire tornadoes.” It takes him about two hours to prepare for a show. The chemicals required for the experiments are mixed and kept ready, and the equipment is tested well before the show starts.

“The show has always had a large proportion of children but the beauty of science is that if children or adults do not understand it, then I need to use the same words for all of them. I use my mum as a test. She is not a scientist, so if she can understand it then so will other adults and children,” Mark concludes.

Tickets for Mark Thompson’s Spectacular Science Show, which will stream on July 10, 6.30 pm, are priced at ₹708 including GST and are available on insider.in

Previous articleK Balachander at 90: Kamal Haasan remembers his mentor as important son of Indian cinema
Next articleThe One and Only Ivan trailer: Bryan Cranson-starrer tells the emotional story of a captive gorilla