Meet Radhamani Amma, a 69 year-old who can operate a forklift 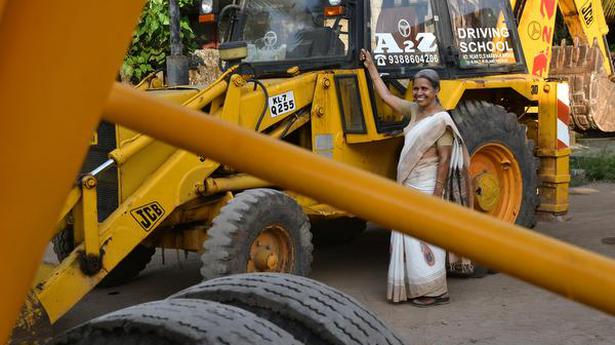 Sixty-nine year old Radhamani Amma of Thoppumpady, near Fort Kochi, looks more the indulgent grandmother, than somebody who is authorised to drive 11 vehicle classes. She can operate an excavator, forklift, and crane; drive a road roller, tractor, trailer (for containers), bus and lorry. She also has a four-wheeler, three-wheeler and two-wheeler license.

Radhamani is perhaps one of the first women in Kerala to get a heavy vehicle license. She got her first for both bus and lorry in 1988, encouraged by her husband who started the A-Z Driving School, in Thoppumpady in the 1970s. Then drove a bus from Thoppumpady to Cherthala, 33-odd kms, where the heavy vehicle licensing authority was based at the time. “I had my husband, TV Lalan, accompany me, I was not afraid of driving the bus. It is like any other vehicle besides I was driving after learning how to,” she says.

Hailing from Arookutty, near Kochi, she came to Thoppumpady as a 17 year-old bride. “My Class 10 results were announced after I came here,” she adds with a laugh. Her husband passed away in 2004, and ever since, she has been at the helm of the driving school, which she runs with her two sons, daughter-in-law and grandson. She still counts her husband as her biggest support, stating “all this is possible because of him.”

In order to run a driving school, it is mandated that the proprietors have licenses for the vehicles they teach. Although Radhamani does not need to drive any of these, as she is not a part of the regular teaching team of her driving school, she gets to use her skills once in way when she pitches in to do demonstrations for students.

The first vehicle Radhamani learnt to drive was a car, for which she got a license as a 30 year-old in 1981. Later when Lalan decided to teach students how to drive heavy vehicles, as a stakeholder Radhamani says she too had to learn. “Learning or getting a license is not difficult. You are being taught what to do, you just follow the instructions,” she says. However, she admits that the did find driving the container trailer challenging. “It is not an easy vehicle to manoeuvre, especially tough is reversing it,” she says. “I have driven most of these vehicles on the driving track,” she confesses.

Which is the one vehicle that she has not tried? The tower crane, she says. “It is quite high, there a quite a few steps to reach the cabin, climbing into it is not easy, especially in a sari,” she says. Her sari also made it difficult to learn how to ride a bicycle. “I never got around to learning cycling. Riding a bicycle in a sari or skirt was not easy back in the day: The ladies bicycle wasn’t common and learning it on a cycle with the bar didn’t appeal to me,” she states.

Radhamani Amma is at ease with most heavy vehicles
| Photo Credit: Thulasi Kakkat

Despite being able to rumble by in a lorry, Radhamani got her two-wheeler comparatively late, in 1993, but it quickly became her favourite mode of transport. She still rides her scooter everywhere. “Back then the cars would be out for driving lessons, and I would be stuck. So my husband bought me a scooter and told everyone that it was mine alone. I find it is the most convenient means of transport. I take the car out only if I need to but I prefer the two-wheeler.”

Previous articleDrama during COVID-19: How theatre is going online
Next articleCoronavirus: not a marketing hook