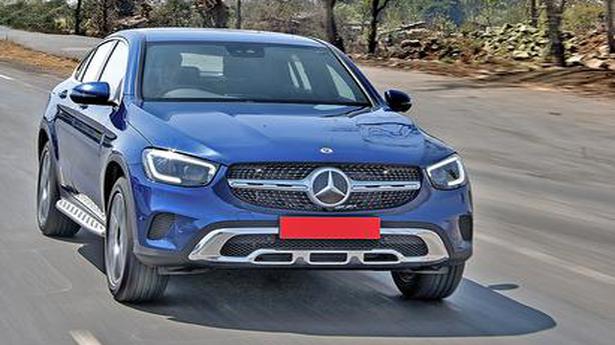 When the GLC Coupe arrived in India in 2017, it was available solely as an AMG model and was a CBU import. Now with the launch of the facelift, not only is the GLC Coupe locally assembled, but Mercedes has also launched two regular variants: a petrol 300 4Matic and diesel 300d 4Matic.

Coming to the aesthetics, the headlamps get revised detailing, and while the model continues to sport a single bar, diamond-head pattern grille, much like the pre-facelift AMG Coupe, the pin heads are not chromed. The bumper is the same as on the regular GLC and gets aggressive cladding on the lower edge. At the side, the GLC Coupe retains the slim running board of the earlier car, and while the AMG had a black window trim, the updated model gets a full chrome surround. The 19-inch alloys also sport a new six-spoke pattern. At the rear, there are restyled tail-lights with the lighting element design now resembling the pattern on the regular GLC.

The interiors too receive a subtle makeover. A big update, though, is the introduction of the new Mercedes MBUX connectivity system along with the connected car experience with an onboard SIM. The new system is slick and easy to use with a touch-sensitive pad in the centre console, two mini touchpads on the new steering wheel along with a larger 10.25-inch touch-responsive screen. The system works really well and allows precise control. However, I would have preferred the older click wheel on the centre console as it is easier to control certain functions while on the move. There is also the new ‘Hey Mercedes’ voice command assistant for a hands-free experience; it can also recognise conversational voice commands. The system offers Android Auto and Apple CarPlay along with built-in navigation. Another small but welcome addition is wireless charging, but something that is not great is the switch to Type C USB ports. Unlike the standard GLC, the Coupe gets full digital dials that can be altered based on your preference and the driving mode too. There is also a memory function for the driver’s seat.

Speaking of seats, the comfort in the car is top-notch and spending a day behind the wheel was not a backbreaking affair. Rear seating too is comfortable and offers good back support although tall occupants might find headroom a bit tight. Mercedes has thankfully liberated more room in the boot with the space-saver now sitting under the boot floor rather than on it. The dipping roof, of course, still eats into space, but you can at least now get some bags in and have a spare tyre too.

As mentioned before, the GLC Coupe now comes with petrol and diesel mills. The petrol is a 2.0-litre, four-cylinder unit that delivers 250hp and 370Nm of torque while the diesel (the model tested here) is a 2.0-litre, four-cylinder unit that puts out 245hp and 500Nm of torque. Both are BS-VI compliant and are the same units in the regular GLC but in a higher state of tune.

The 2.0-litre OM654 unit impresses with its refinement. Noise and vibrations are minimal at start-up, and, even when on the move, you have to make a conscious effort to remember there is an oil-burner under the hood. Rev it hard and it does get vocal yet it never feels harsh or strained. Power delivery is linear and strong all the way up to around 4,500rpm where the 9-speed automatic gearbox will upshift no matter the drive mode you are in. Even in manual mode, the gearbox will not allow you to hit the 5,500rpm redline. The gearbox is a smooth-shifter but isn’t lightning-quick. Compared to the 220d, the 300d does feel faster with Mercedes claiming a 0-100kph time of 6.6sec against the 220d’s 7.9sec time.

Mercedes has also softened the suspension this time around. It works well to absorb bumps and ruts. At speed, however, there is some body float, and spirited driving in corners will have you wishing for a firmer sportier setup. The steering, which is influenced by the drive modes, was hefty enough at higher speeds and light enough at lower speeds.

Earlier, with the Coupe being available as an AMG-only model, things were a lot simpler — you either picked practicality or all-out fun. Now though, with the facelift, things get a little complicated. In a way, the new model sits in no man’s land: it is neither spacious nor practical as the regular car, and it isn’t as sporty or fun as the AMG. On the other hand, if you have always fancied the appeal of an SUV-coupé, you now do not have to go the whole hog into AMG territory and stretch your wallet too. You can enjoy the sportier appeal of the Coupe, get some extra performance at the pedal and a bit more equipment like a memory seat and an all-digital instrument panel, and all this for a not too much of a premium of approximately ₹6 lakh. The 300d Coupe 4Matic comes in at ₹63.70 lakh, while the regular 220d 4Matic diesel costs ₹57.75 lakh (ex-showroom, pan India).

It all boils down to your disposition towards SUV-coupés. If you are not a fan, look at the regular GLC. But if you love them, you now have more choice. And, oh, did I mention? Mercedes says the AMG is likely to follow too.