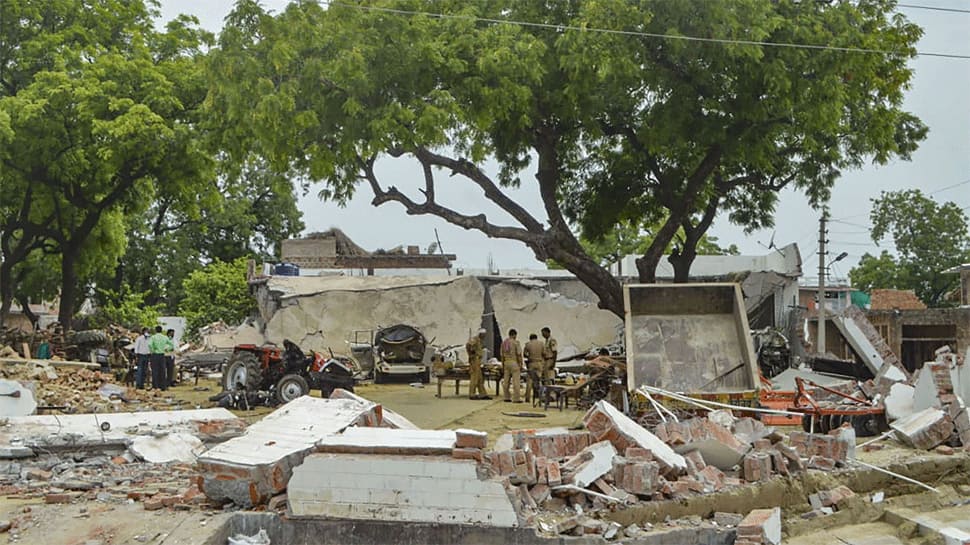 Kanpur: Uttar Pradesh gangster Vikas Dubey whose house was bulldozed by the authorities in the Bakru village in Kanpur was spread over 42,000 sq feet where he along with his gang members unleashed an unprecedented bloodbath in the wee hours of July 3.

On Sunday, authorities demolished the house-mansion of Dubey and also destroyed his two SUVs and two tractors which were parked inside a garage and courtyard. The demolition had taken place in the presence of heavy police force.

In a related development, the STF probing suspended Chaubepur Station Officer-in-charge Vinay Tiwari, about his role in the Kanpur encounter, found out that he had tipped off Dubey at least five hours before the police carried out the raid at Bikru village to arrest the gangster and his men. Tiwari was apparently miffed with his seniors over some issue and hence was leaking out the information to the gangster, said sources.

In fact, Tiwari is also said to have visited Dubey’s now-demolished house a few days ahead of the raid-encounter took place, thus raising suspicion on his link with the notorious criminal.

Speaking to reporters, Kaushalendra Pratap Singh, the station officer of Bithoor police station, said, “Dubey’s men were fully prepared. Each of them had weapons. They were using semi-automatic weapons. In single-shot weapons there is a time gap between two shots.” The SO said Dubey’s gang had been briefed about the imminent police raid and made preparations, even arranging the lighting in such a manner that the policemen had to face the darkness.

“They had made arrangements in such a way that the focus of the light was on us, and not on them. We could not see them,” Singh said.

Tiwari, along with three other police personnel have been suspended from the duty for their suspected role in leakage of information and laxity of duty. A police officer said all three policemen had accompanied the then Chaubeypur station officer Vinay Tiwari in the raid, meant to arrest Vikas Dubey following a complaint by local businessman Rahul Tiwari that he was thrashed the alleged gangster.

Vikas Dubey, who has faced about 60 criminal cases over the years, had set up an ambush for the policemen on July 3, killing eight of them and injuring a few others.

Previous articleThere’s nepotism in the industry, no two ways about it: Tamannaah Bhatia
Next articleGold declines by Rs 42 per 10 gram, silver plunges Rs 1,217