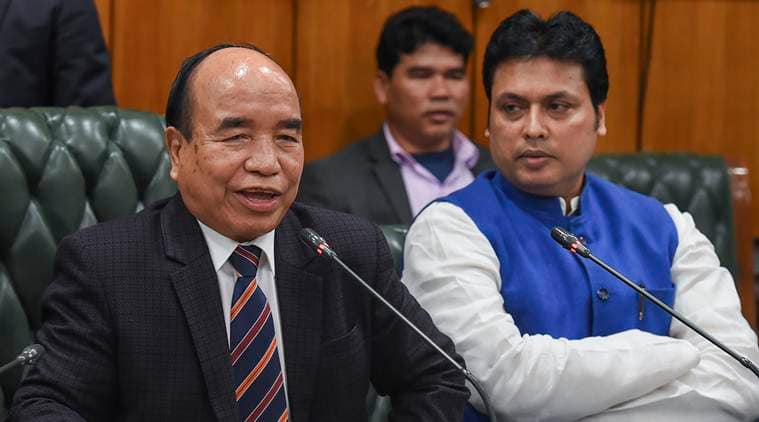 Mizoram Chief Minister P Zoramthanga wrote to his Tripura counterpart Biplab Kumar Deb, requesting him to reconsider resettling Bru migrants in Jampui Hills and adjoining areas. His letter came weeks after Mizo Convention, a NGO of Mizo community based in North Tripura, staged a protest against the resettlement process.

In his letter, the Mizoram CM said Brus and Mizos have historically shared ethnic tension and upheavals, both in Mizoram and Tripura. He said any ‘strain’ between the two communities in Tripura is likely to have “repercussions” in Mizoram.

“…there has been ethnic tension and upheaval between Mizos and Brus, both in Mizoram and Tripura ands any strain between the two communities in Tripura will no doubt have repercussions in Mizoram and vice versa, which could defeat the very purpose and spirit of the Agreement signed between representatives of Bru community, Chairman of TIPRA, Chief Secretary of Tripura, Chief Secretary of Mizoram, Joint Secretary (Ministry of Home Affairs) on 16.1.2020,” Mizoram CM Zoramthanga’s letter reads.

He requested Tripura to “immediately reconsider and cancel” the proposal for resettlement of displaced Brus at Jampui Hills and adjoining areas, which he claimed to be ‘traditional habitat’ of the Mizo community in Tripura.

A senior official of the state government, who didn’t wish to be named, said the letter hasn’t officially reached the Chief Minister’s Office (CMO) yet. “We aren’t aware of any such official letter from Mizoram Chief Minister. Tripura is dealing with Bru resettlement internally and as per instruction of the Government of India. Any course of action can only be set after receipt of the letter,” the official informed.

Another official attached with the resettlement process said that only two out of 12 proposed spots for resettling the Bru migrants were unanimously accepted. The migrants raised some objections for other spots and they are still under discussion.

The letter has received severe criticism from Bru migrants who said they feel Mizoram CM Zoramthanga’s letter is a veiled threat to their peaceful resettlement process in Tripura.

Speaking to indianexpress.com, Mizoram Bru Displaced Peoples Forum (MBDPF) general secretary Bruno Msha said, “Mizoram government repeatedly failed to strike amicable solution for Bru migrants in 23 long years when they were supposed to repatriate them back. When we are on the cusp of a proper resolution of our protracted displacement crisis, it is undesired that Mizoram should interfere in this issue”.

“Brus in Tripura have lived peacefully for over two decades. This is a veiled threat of repercussion on our Bru brethren in Mizoram. This is most uncalled for,” Bruno said.