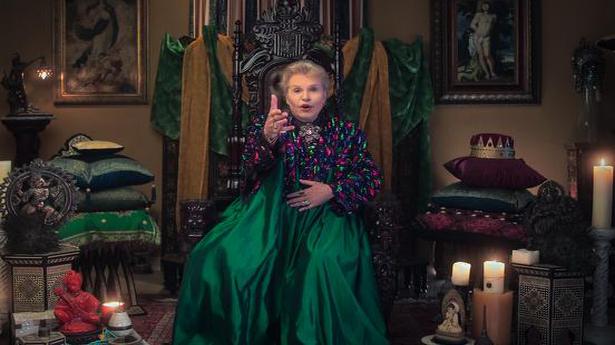 At one point in Mucho Mucho Amor: The Legend of Walter Mercado, there is a tiny segment featuring a stock footage of American radio personality Howard Stern — known for hosting The Howard Stern Show in the ‘80s — who dared to speak the obvious but unspeakable about star astrologer Walter Mercado, when the latter was invited as a guest on the show. “You’re bigger than Jesus Christ, aren’t you?” asks Stern, putting Mercado in a tricky position — perhaps, even giving him the benefit of the doubt, for a moment. The answer is a humbling ‘no’ but upon further pressing, he admits to the halo and his near-cult status: “They treat me like Jesus. Like Buddha. But I was hesitant at first.”

A blond, gifted with a vibrant, empathic voice and hypnotic hand gestures, and botox resulting in a badly-augmented Deepfake of Nicole Kidman blurring the conventional lines of gender, is Walter Mercado a man or a woman? Is he an astrologer or a sorcerer? A motivator or Messiah? In Mucho Mucho Amor, filmmakers Cristina Costantini (of Science Fair fame) and Kareem Tabsch (The Last Resort) unearth this rather mystical personality, who, at the height of his popularity, seemed to have amassed a following of over 120 million across the US and Europe. For those unbeknown to the legend of Walter Mercado, like this writer, the documentary, with a runtime under 100 minutes, shows snatches of his glamorous life; his rise and fall, his disappearance from the public eye following a lawsuit costing him a hefty price and a cardiac arrest; and his eventual reappearance for an exhibit at the History Miami Museum in 2019, after which he died three months later.

Mucho Mucho Amor opens with choir music and a dramatic entry from Mercado with his usual theatrics, carrying a playful attitude when predicting the destinies of his followers, based on their zodiac signs — as though he were The Chosen One. The documentary begins in the present where Costantini and Tabsch track down the mysterious disappearance of the astrologer, who once dined with President Bill Clinton, Hollywood celebrities and influential leaders. Some say he died twice, some believe he was extraterrestrial and some were convinced that he lives on another planet. But these are just projections. In reality, he has taken comfort in San Juan, Puerto Rico, where he lives with his assistant Willie Ascousta, who, when asked if he was his right hand, says “the left one too”. Ascousta’s relationship with Mercado is ambiguous and the documentary does not broach topics that are personal, like the latter’s non-confirming gender, which seems to have resonated with LGBTQI+ community, for which he was subject to homophobic jokes.

Divided into chapters, Mucho Mucho Amor is interwoven with tales, interviews and archival footage and takes a fair amount of time to establish its subject. We see Mercado’s early beginnings; he recounts an incident when he was a boy, when he rescued a gravely-injured bird and murmured prayers for its life. His neighbours were convinced of his rare possession: the power of healing.

Behind the glitz and glamour and opulence, the astrologer appears to have been a simple man (and a woman: “a bit of both,” he says, taking a leaf out of Osho’s book) who gave followers what they lacked and yearned: hope and belief. For most part of the time, you cannot help but wonder if Mercado was a myth or an actual person. That, however, is Mucho Mucho Amor’s significant achievement; the directors have taken a myth and have humanised his larger-than-life character. Most believed Mercado was a motivator, or as rationalists would call an ‘exploiter’; of the vulnerable and needy.

The documentary, however, is an unusual case where the perceived-exploiter is exploited by another man — in this case, Bill Bakula, who was Mercado’s ex-manager who cashed in on the brand he built over decades. The wardrobe that was once filled with glittering capes, lavish jewels and crystals, are now replaced by vitamin supplements, thanks to Bakula.

Like how most (well-made) documentaries would do, Mucho Mucho Amor, a title taken from Mercado’s closing line during his TV shows, leaves viewers with questions without squaring our perceptions. But you do sense that even Costantini and Tabsch were quite charmed and overwhelmed by Mercado’s presence — they dedicate the movie to their grandmas and to all the grandmas of the world — for their film paints a pretty picture about a has-been celebrity, giving him a (deserving?) closure.

There is a split-second portion that gives a rare and clearer perspective into the formation of a cult, when one of Mercado’s followers makes a casual but revelatory observation. “Walter never says anything negative or something that would upset his followers,” says the man, which ties to the argument of why people, especially minorities, are gullible to cult figures, in the first place. In a world already familiar with the dangers of cult, thanks to the Netflix-backed Wild Wild Country and the like, it must have been a test of their artistry for the director duo, to construct a compelling narrative out of Mercado’s fairly simple life.

For one, he neither had the charisma of Bhagwan Rajneesh (aka Osho) nor did he boast of a luxurious life like the yoga guru Bikram Choudhury, nor did he have sinister intentions like a David Berg or the infamous murderer Charles Manson. So, what makes Mercado an interesting subject for a documentary? It is an easy question to throw around, but the answer is even more simpler and lies in this response by a fan, in the documentary, when was asked if he bought into horoscope. “Well, I believe in Walter Mercado.”

Perhaps it is too far fetched to call Walter Mercado a cult. He was and still is a myth who lives inside a television box.

Mucho Mucho Amor: The Legend of Walter Mercado is streaming on Netflix