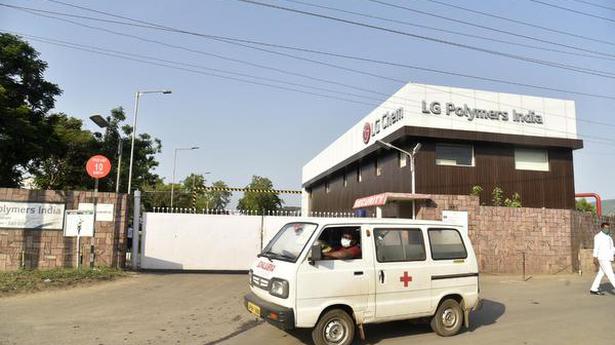 The National Green Tribunal (NGT) held that LG Polymers India has absolute liability for the loss of life caused by a gas leak at its factory in Visakhapatnam. It said the ₹50 crore in compensation, deposited by the company, would be spent on restoration. It also constituted a committee to prepare a restoration plan.

Referring to an inspection report furnished by a NGT-appointed committee, a Bench, headed by Chairperson Justice Adarsh Kumar Goel, said, “The committee has opined that the company did not take proper care of the storage tank resulting in auto polymerization of styrene releasing excess heat which escaped from the goose-neck and dip hatch in the form of vapour.”

It also noted the committee’s submissions pertaining to the unit operating without requisite environmental clearances.

The Bench said, “Overwhelming material establish liability” of the company. “The company has operated without EC [environmental clearance] and the State PCB, on account of its ignorance of law or otherwise, gave ‘Consent to Establish’ and ‘Consent to Operate’ in violation of law. The amount deposited has thus to be appropriated towards part liability and interim compensation, subject to further others,” it said.

The NGT directed a committee of representatives from the Ministry of Environment, Forests and Climate Change (MoEF&CC), the Central Pollution Control Board (CPCB) and State government officials to prepare a restoration plan within two months. It directed the Andhra Pradesh Chief Secretary to take action against persons responsible for permitting the unit to operate in violation of law.

“In view of the stand of the State PCB and the company that it will not recommence its operation without requisite statutory clearances, we direct that if any such statutory clearances are granted, this aspect must be brought to the notice of this Tribunal so that compliance of law is ensured,” it said.

The Environment Ministry was also directed to revamp monitoring mechanisms to prevent violation of environmental norms.

The NGT said it had a wide jurisdiction, including the power to institute proceedings suo motu and not “keep its hands tied in the face of drastic environmental damage”.