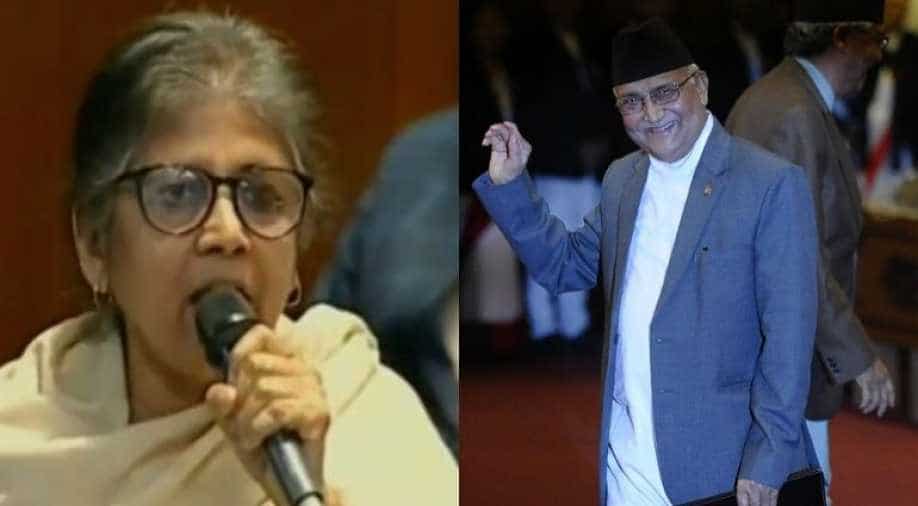 A Nepalese lawmaker has been suspended by her party for taking a pro-India stance and her name is Sarita Giri. She was a member of Nepal’s Samajbadi Party.  The Chinese are still playing real-life checkers in Nepal and the loser will most likely by Nepalese Prime Minister KP Sharma Oli.

Sarita Giri violated a party whip regarding Nepal’s new map. She accused China of pushing the new map bill and raised questions on the intent of the Oli government in fixing the country’s map.

The lawmaker may have been suspended but she speaks for many in Nepal because China’s hidden hand in Nepal is not-so-hidden anymore and people have been protesting.

Hou Yanqi, the Chinese ambassador to the Himalayan republic  has been carrying actions well beyond her duties and responsibilities as a foreign envoy. Yanqi was pulling strings for China in Nepal but many said that the report was too far-fetched. Now, the Nepalese media and political leaders are saying what the report said three weeks ago.

The front page of the Kathmandu Post read: “Chinese ambassador making the rounds at a time of internal political crisis invites much criticism”.

China is openly interfering in Nepal’s internal politics. On Tuesday, the Chinese ambassador met the senior most leader of the Nepal Communist Party, the former prime minister of Nepal Jhala Nath Khanal.

The meeting is said to have lasted for over 45 minutes but there is no word on what transpired. However, it hasn’t gone unnoticed by political leaders and the civil society in Nepal.

It’s the same message from Nepal’s political leaders. One leader after another has been putting out tweets condemning China’s open interference in Nepal’s domestic affairs.

A tweet by Kamal Thapa who is the former deputy prime minister of Nepal said: “PM Oli says Indian ambassador was active in overthrowing the government. On the other hand, the Chinese ambassador reached the leaders’ house to save the government.”

Nepalese journalists too are calling out this hypocrisy. Pushpa KC is a journalist at Nepal live, she said: “What activism is the Chinese ambassador taking advantage of?”

The Chinese ambassador has held a series of political meetings since May 1 which is being called to reconcile differences within the ruling party. The meetings also reflect China’s growing clout in Nepal.