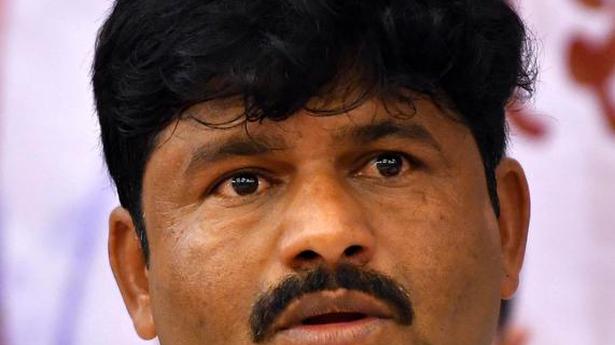 BJP’s new Member of Legislative Council (MLC) Gopichand Padalkar sought to compare Nationalist Congress Party (NCP) chief Sharad Pawar to the novel coronavirus at a press conference, triggering sharp protests from the NCP that has sought an unconditional apology from him and the BJP.

Addressing a press conference at Pandharpur in Solapur district on Tuesday, Mr. Padalkar alleged that the bahujan samaj has been suffering because of the policies of Mr. Pawar, whose party is a key constituent in the Shiv Sena-led Maha Vikas Aghadi (MVA) government.

He said, “According to me, Sharad Pawar is the corona that has infected the State. Pawar has always taken steps that would hamper the prospects of the masses.”

The NCP did not take Mr. Padalkar’s comments lightly. NCP leader and Housing Minister Jitendra Awhad said any minion who wanted to make a name for themselves in Maharashtra attacked a towering figure like Mr. Sharad Pawar. “It gives them publicity. The BJP in Maharashtra has been complaining to the police about internet trolling. What do they have to say now?” he asked.

Mr. Awhad said, “Devendra Fadnavis inducted Mr. Padalkar in the BJP despite his criticising Prime Minister Narendra Modi. Now it is the responsibility of Mr. Fadnavis to answer whether he supports such comments.”

NCP workers across the State staged protests against Mr. Padalkar and places such as Solapur and Sangli will be witnessing more protests in the coming days, demanding an apology from him.

Mr. Fadnavis, who was in Pune on Tuesday, agreed that the comments made by Mr. Padalkar were not appropriate. “I had a word with Mr. Padalkar. I told him that though Pawar saheb is our political opponent, he is not our enemy. I told him that forget Pawar saheb, making such remarks against any senior leader is not appropriate. If anyone wants to express his opposition, it should be done using appropriate words,” said Mr. Fadnavis, who is Leader of the Opposition in the Assembly.

Mr. Fadnavis said Mr. Padalkar had accepted that it was an emotional outburst against the veteran NCP leader. “Mr. Padalkar said he will give a clarification. He has accepted … Young leaders from all parties should exercise restraint while speaking,” he added.

Coming to the limelight as a leader of the State’s Dhangar (shepherd) community, Mr. Padalkar has claimed that he does not think that Mr. Pawar is in favour of reservations for the community. Interestingly, Mr. Padalkar had contested the 2019 Lok Sabha elections as a candidate of Prakash Ambedkar-led Vanchit Bahujan Aghadi (VBA) from Sangli. He had then criticised Prime Minister Modi but lost to the BJP candidate.

After the Lok Sabha polls, he shifted sides to join the BJP in the presence of the then Chief Minister Mr. Fadnavis and contested the 2019 Assembly polls in the State against NCP leader and present Deputy Chief Minister Ajit Pawar from Baramati. He lost deposit as Mr. Ajit Pawar won the poll by a huge margin. He was nominated to the State Council from the BJP quota last month.

The Dhangars have been demanding Scheduled Tribe (ST) status, while they are presently being categorised into the Vimukta Jatis and Nomadic Tribes category. The previous BJP government had promised to extend ST status to Dhangars in 2014, which was not fulfilled. A report was commissioned by the previous government from the Tata Institute of Social Sciences regarding the issue, which has not yet been made public.