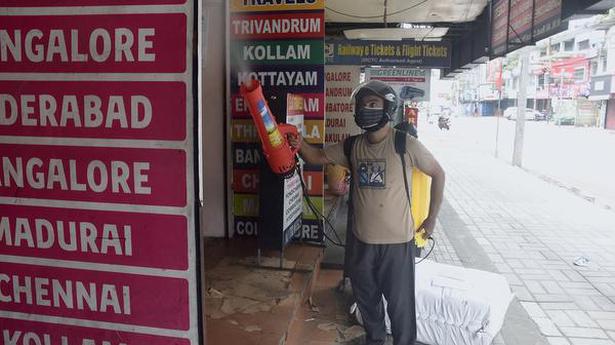 Twenty-nine persons tested positive for SARS-CoV-2 in Palakkad district on Sunday. They included a 13-year-old girl from Puthuppariyaram.

As many as 188 infected persons are currently under treatment in Palakkad district. Besides them, 10 persons from the district are being treated at Manjeri, five in Ernakulam, two in Kozhikode and one in Kannur.

District Collector D. Balamurali has requested people to stay away from felicitating winners of SSLC and other exams. He said everyone had the responsibility to prevent a community spread.

An 82-year-old man from Wandoor under observation for COVID-19 at Government Medical College Hospital, Manjeri, died on Saturday night. He was suffering from respiratory illness.

Test results found him positive for COVID-19 on Sunday morning. He was admitted to the hospital on July 1 after his return from Saudi Arabia on June 29.

Meanwhile, 26 persons tested positive for the virus in Malappuram district on Sunday. Two of them were found to have contracted the infection through local contacts.

While 23 of them had returned from abroad, one person had come back from another State. All but five of them are being treated at Government Medical College Hospital, Manjeri. While four are being treated in Kannur, one is in Ernakulam.

As many as 281 infected persons were currently under treatment in the district, said District Collector K. Gopalakrishnan. With 1,729 persons freshly sent into isolation on Sunday, over 36,500 persons are currently in quarantine in the district.

District Medical Officer K. Sakeena said that if anyone had contacted with the newly infected persons, they should go into room quarantine in their respective homes.

Those who do not have facility at homes could make use of the government facility, she said.

Twenty people were declared tested positive for SARS-CoV-2 in Kozhikode district on Sunday, including five through contact with infected persons. Five others recovered from the infection too, said a release. Right now, there are 116 active COVID-19 cases in the district.

Five of those newly infected are residents of Vellayil in Kozhikode city. They had been in contact with a security guard in an apartment, who was tested positive for the virus after he was found to have committed suicide. They are, women aged 63 and 53 respectively, and children aged five, three-and-a-half years, and one-and-a-half years. Their condition was diagnosed after a special screening of the residents in the area.

Among the other infected patients, there are a 29-year-old native of Changaroth and her four-year-old daughter, who returned from Bahrain on June 24 and were under home quarantine. Their body fluid samples were collected at a Nadapuram hospital on July 1 after the child showed COVID-19 symptoms.

Right now, 18,029 persons are under observation in the district, including 1,409 who were newly added to the list. Among them, there are 11,620 expatriates.

Thrissur district recorded 12 fresh COVID-19 cases on Sunday while 12 were recovered from the disease. No one got infected through contact.

The positive cases included two BSF jawans who came from Kollam. As many as 188 persons are undergoing treatment for the disease in the district. In all, 18,308 persons are under observation. Meanwhile, 59 persons reached Thrissur in two special trains from other States on Sunday.

Twenty-five new cases were reported in Kannur on Sunday. While eight of them returned from abroad, another eight persons came from other States. Seven were Defence Security Corps personnel and two were CISF personnel.

With this, the total number of COVID-19 cases reported in the district rose to 585. Of them, 328 were cured of the disease.

The district currently has 23,940 persons under observation.

Kasaragod is witnessing yet another spike in COVID-19 cases. On Sunday, 28 persons tested positive for the virus. Among them, seven contracted the disease through contact. Ten patients came from abroad and 11 returned from other States, said District Medical Officer A.V. Ramdas.

Those who got infected through contact are from Manjeswaram, Vorkady, Meencha, Paivalike and Kumbala. Of them, one is a lab technician and another was working at a community kitchen.

The district now has 7,230 persons under observation.

Among the patients, three returned from Tamil Nadu and two came from Bengaluru in Karnataka.

A youth from Kaniyampetta who returned from Sharjah was the other patient.

They were shifted to District Hospital, Mananthavady.

Of the 107 cases reported in the district so far, 71 have been cured.